OVERLAND PARK, Kan. — A python lounging over an Overland Park mailbox was the talk of the neighborhood Friday.

Neighbors that FOX4 spoke with say the 8-foot-long snake wrapped itself in the home’s railing and over a mailbox.

A postal worker discovered the out-of-place snake during his typical route Friday. 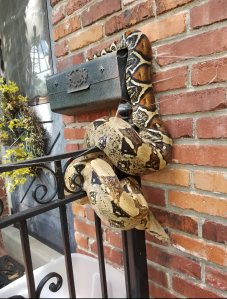 “He did not want to deliver the mail because he was concerned about having a woman come out the house,” David Shepherd said.

Shepherd and his wife have lived in town for 40 years but said Friday was a first.

“I`ve seen snakes here — but not one like that,” he said.

Pictures posted by Overland Park police show three animal control officers helping to remove the large snake. They took it to a safe shelter until they’re able to find the owner.

“I don`t want a pet python. That does not appeal to me,” a neighbor named Arnie said.

Neighbors said they expect the pet python belongs to another family in the area, but that doesn’t make the encounter any less bizarre.