LEE'S SUMMIT, Mo. -- On Monday, fans of the movie "It's a Wonderful Life" got the chance to meet one of the film's stars, actress Karolyn Grimes, who played Zuzu, at a special screening at Alamo Drafthouse.

Among those in attendance, were John and Ruth Mencl of Lee's Summit. John Mencl was in law school in 1980 when he first saw the movie that would become his life's obsession.

"This movie comes on, Frank Capra's 'It's a Wonderful Life' and it just sucked me in," he said.

Grimes, 79, gave the crowd a rendition of her signature line from the 1946 film: "Teacher says every time a bell rings, an angel gets his wings." Ironically she never saw the movie until 1980 either.

"I did go to the movie premiere, but I fell asleep," said Grimes, who was 6 at the time.

Mencl met the woman who'd become his wife a couple years after first seeing the film, but made her watch it before popping the question.

"I saw it with him, and I loved it just as much as he did. Little did I know, if I hadn't, he would have dropped me," Ruth Mencl joked.

They'd start building a collection of memorabilia that included the 1919 National Geographic that George shows Mary at the soda fountain.

"When he talks about coconuts and coral seas and the Fiji islands, those stories are in here," Mencl said holding a 100-year-old copy of the magazine he tracked down.

But their collection really took off after Mencl learned in 1995 that Grimes was living in the Kansas City area at the time. John and Ruth managed to meet her first dining at an Overland Park restaurant named "Martini's," like the bar in the film.

The Mencls acquired more items like Clarence's special copy of Tom Sawyer, printed by Gutenberg, and the original short story the film was based upon. 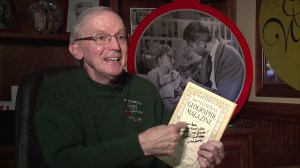 Mencl has what he believes is one of only two remaining copies of "The Greatest Gift" that author Phillip Van Doren Stern sent as Christmas cards when he struggled to get published.

As their collection began to outgrow their home, the Mencls realized a lesson from the film.

The Mencls were already regulars at the "It's a Wonderful Life Festival" in Seneca Falls, New York. It's a town that bills itself as "the real Bedford Falls." Frank Capra is said to have visited and crossed the bridge with a plaque commemorating a man who jumped in the river to save a woman and lost his own life.

Although neither Grimes, the Mencls, nor a handful of other fans with collections lived in Seneca Falls, they decided to help Grimes open the nation's only museum dedicated to the movie -- or any black and white film.

The collection includes items like the movie's cigar lighter.

"It's such a thrill to see fans encounter it and say that's just like in the film. 'I wish I had a million dollars, hot dog!'" Mencl said, crossing his fingers like Jimmy Stewart did.

One of the themes of the movie is how one person can affect other's lives.

"You don't realize how much your life can make a difference for people, and I think that's what really tugs at people's heart strings," Ruth Mencl said.

Grimes will be in Seneca Falls for the festival Dec. 13-15. She's happy to have the president of the Zuzu Society and his wife by her side for the 15th straight year.

"The kind of people who love the movie 'It's a Wonderful Life' are wonderful people," Grimes said.

“Medical professionals and first responders across the state are working tirelessly to meet the rising needs and challenges posed by the COVID-19 crisis,” Governor Mike Parson said.  “We are calling on all available medical professional to support the effort to fight the virus by joining a critical reserve unit now focusing on providing care in high need areas across the state.  Their efforts can help save the lives of their Missourians.”

TOPEKA, Kan. — Kansas State Treasurer Jake Laturner will be awarding 20 scholarships to Kansas high school seniors from across the state.

More than 1,000 nominations for the surprise a senior scholarship giveaway have been submitted.

JEFFERSON CITY, Mo. -- Many of Missouri’s native trees and shrubs bloom in spring, putting on dazzling displays that attract wildlife such as birds and pollinators.  Flowering spring trees and shrubs can be enjoyed while out in the yard, out on a walk, or even from the indoors while social distancing.  In order to make enjoying the outdoors as safe as possible, it’s critical for people to maintain physical distancing, avoid overcrowding and continue handwashing or sanitizing.

The Missouri Department of Conservation reminds us of some of the early bloomers to look for in the next few weeks: