LEE’S SUMMIT, Mo. — The Lee’s Summit Police Department is attempting to locate a suspect who is wanted for the murder of a 23-year-old woman.

According to court documents, on March 28, 2019, police and emergency crews responded to a home where they found Stephens unresponsive in a bathtub. She was taken to an area hospital where she was pronounced dead. 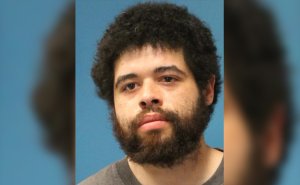 At the scene officers located a syringe, a rubber tourniquet and a syringe cap in the bathroom. Stephens
was a known heroin user and the syringe is suspected to have been used to inject the heroin, according to documents.

In April, a detective spoke with someone who wanted to supply information on Daniels, who was selling heroin in the Lee’s Summit area. That person said Stephens was one of several who obtained heroin from Daniels.

Daniels was arrested on April 9, 2019 for driving with a suspended license in Missouri and was found to be in possession of heroin, pills of a controlled substance and other drug paraphernalia. Daniels admitted to supplying heroin to others as a means to keep himself supplied with it. Daniels stated he knew Stephens and had supplied her with Heroin.

Daniels said he took Stephens to Walmart on the day she died and that her condition did not cause him any alarm. According to the court document, he said “she didn’t look like she was about to croak or nothing.” He then later stated, “well, I know for a fact that what I got and what I handed over isn’t what put her down.”

An April medical report showed Stephens cause of death to be “drowning, with other significant condition to be acute heroin and fentanyl intoxication.”

Documents say that since the cause of Stephens’ death was listed to be a significant condition of acute heroin and fentanyl intoxication and Daniels delivered it to Stephens on the date of her death, his actions directly contributed to her death.

Prosecutors have requested a $250,000 bond. They said this is the first case of this type, where a drug dealer is charged in connection with a death from overdose.

ST. LOUIS - A St. Charles landed a near-record catfish while fishing in the muddy waters of the Mississippi River last week.

According to news partners at the St. Louis Post-Dispatch, Wade Kaminski and a friend were out fishing the big rivers on Friday, July 3 with baitfish they'd caught earlier in the spring.

FORT WAYNE, Ind. -- Have you seen signs at stores that ask for exact change or have a limit on cash?

OLATHE, Kan. -- Olathe police have released the name of the woman who was killed during an aggravated burglary early Sunday morning.

The victim has been identified as 42-year-old Jessica L. Smith of Olathe.