CLINTON, Mo. — The family of Gary Michael, the Clinton, Mo., police officer killed Sunday night, August 6th during a traffic stop, honored him at his funeral Saturday, along with hundreds of others grieving the sudden death of the 37-year-old officer, husband, stepfather, son and friend.

Officer Michael’s funeral was Saturday morning at Benson Convention Center, 1008 E. Sedalia Ave. You can watch a replay of the service in the player at the top of the page (skip ahead to the 37-minute mark for the beginning of the service).

His brother, Chris Michael, delivered the eulogy, and said all Officer Michael had known his calling for a long time, saying he had a servant’s heart.

“My brother’s dream job was being a police officer. The Clinton PD was his dream job. I didn’t know this before, but I knew he always wanted to be police. His first interview was at 16 years old,” Chris Michael said.

“My brother has a passionate, optimistic view of life. When he was 16 he went to (Clinton) PD, Gary walked up said ‘you guys have car chases sometimes and during those maybe you need somebody to help you out. I got a fast car, maybe I could help, maybe I could be a pursuit specialist.’ Unfortunately that job title still does not exist. But Gary did get the nickname of rabbit for his foot-pursuit skills. He loved his brothers in blue.”

On August 6th, at approximately 10:45 p.m. police say Officer Gary Michael tried to stop a vehicle for a registration violation. As Officer Michael got out of the patrol vehicle to talk to the driver, the driver fired a round towards the officer, striking Officer Michael. Ian McCarthy was arrested two days later and charged with first-degree murder and armed criminal action.

“Gary’s passing leaves a seed, may that seed not be one that we remember for what he was, what he did for us in lives. Let that seed be an encouragement for devotion and justice,” Chris Michael said.

“The man Gary Lee Michael could’ve been your son, your cousin, brother. But he was mine. So I stand here today to share his message of hope courage, love and faith. Thanks to all his brothers in blue and first responders.” 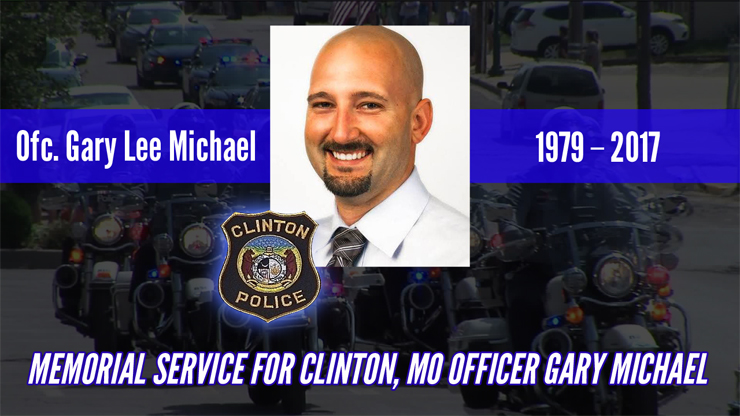