The appearance took only minutes, as the state asked for a ‘no bond’ hold, and the defense did not challenge.

Cruz was wearing an orange jump suit, hands in front of him, and did not look at the judge when she addressed him, saying:

“Okay, sir. You are charged with 17 counts of premeditated murder. I have something very important to tell you. You’re charged with some very serious crimes. You have the right to remain silent. If you give up that right at any time during this hearing, whatever you say can and will be used against you in the prosecution of this case.”

Judge Mollica then asked the prosecution how it wanted to proceed.

‘Are you seeking to hold the defendant no bond and a finding of proof of evidence, presumption great?’

The prosecution argued that Cruz entered the school ‘with a premeditated design, in that he went loaded with an AR-15 rifle. He had additional ammunition with him… and shot 17 individuals who later died as a result of the gunshot wounds and then he fled the scene.”

Then, the judge concluded. 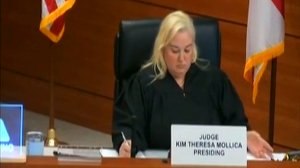 “I find probable cause. I further find the proof of guilt to be evident or the presumption great, therefore Mr. Cruz, you’re going to be held without bond until further order of the court. This order is without prejudice,” Judge Mollica said.

After the court appearance, his public defenders spoke to reporters, but they did it with difficulty.

“He’s a broken human being. He’s a broken child. The sadness that this community is feeling, I mean, my children are, they go to school in this community. I feel horrible for these families and Mr. Cruz feels that pain,” said Melisa McNeil. (Scroll down for her interview.)

Cruz’s other public defender, Gordon Weekes, had to turn from the camera to gather himself when emotion overtook him.

“This is important to make sure that this young man has someone to assist him in making some very, very difficult decisions that he will have to make in a very short period of time. This is a loss for this community. A tragic loss of 17 children,” Weekes said before breaking down.

This brief court appearance comes as the FBI digs into the tips, background, social media accounts, etc., of Cruz, 19. The FBI received at least two reports that Cruz may pose a threat before the shooting, a law enforcement source told CNN on condition of anonymity.

Additionally, the FBI was warned in September about a possible school shooting threat from a YouTube user with the same name as the suspect in Wednesday’s campus massacre in Parkland, Florida, according to a video blogger.

Ben Bennight, the 36-year-old YouTube video blogger from Mississippi, noticed in September an alarming comment on a video he’d posted. He told CNN he immediately contacted the FBI. 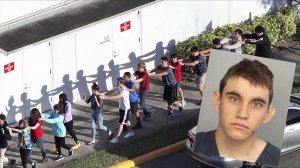 “Im going to be a professional school shooter,” read the comment, left by a user with the name Nikolas Cruz, the same name of the suspected shooter who opened fire at Marjory Stoneman Douglas High School on Wednesday, killing at least 17 people.

It was one of at least two alleged threat reports about the suspected shooter that the FBI received, according to a law enforcement official. In both cases, the FBI did not share the information with local law enforcement, the official said.

Bennight emailed a screenshot of the comment, which he shared with CNN, to what he thought was an FBI tip line, but the email address was invalid, he said. Bennight said he followed up with a phone call to the FBI. The comment on YouTube has since been pulled down.

According to Bennight, agents from the FBI’s field office in Mississippi contacted him and came to his office to conduct an in-person interview the next morning. Bennight told the agents he didn’t know anything about the user, he told CNN.

That was the last contact he had with the FBI until Wednesday, he said.

The FBI special agent in charge of the Miami division, Robert Lasky, confirmed Thursday morning that the bureau received a tip last year about the YouTube comment.

It’s not clear whether the FBI ever identified the suspect in the other alleged threat report.

The YouTube comment and Bennight’s efforts to alert the FBI were first reported Thursday by BuzzFeed News.

On Wednesday afternoon, after Cruz was arrested, Bennight got a call from an agent in the FBI’s Miami field office, who wanted to follow up on the September incident, he said. A few hours later, FBI agents from the Mississippi office paid Bennight another visit.

“I saw the story kind of go across my newsfeed, but I didn’t pay a whole lot of attention to it,” he recalled Thursday in a phone interview with CNN. “But when the FBI said it was the same name, the first thing that went through my mind was, ‘Wow, I hope you were at least watching this guy that I alerted you to months ago.”

“I think in today’s online world, it is very difficult to narrow down who does what without more information,” Bennight told CNN’s Jake Tapper later Thursday, “and unfortunately, I wasn’t able to provide them with much.”

Noting that he doesn’t know exactly what it takes for the FBI to investigate these sorts of tips, Bennight acknowledged that “had more time and effort been put into finding out who the username belongs to, … they may have been able to find out who this person was and put him on their radar.”