KANSAS CITY, Mo. -- It was a love fest at Kauffman Stadium on Thursday, one fans and the team needed after Game 7's heartbreaking loss. Royals Manager Ned Yost confessed when he woke Thursday morning, he didn't want to get out of bed.

"I didn't even want to get out of bed. I just wanted to lay there," he said. "I just want to kind of get in a closet and shut the door and be quiet for a little while and reflect on all of this," he said.  "We were 90 feet away from winning a championship in my mind, after a long, long year." 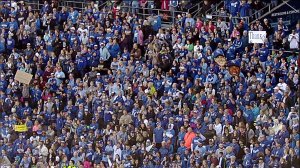 Following their remarkable post season run, the Kansas City Royals greeted around 5,000 cheering fans and thanked them for their support. In turn, those fans cheered as wildly as if the boys in blue had won the 2014 World Series. Some of the players took the opportunity to speak to the crowd. James Shields was first to take the microphone.

Next it was Billy Butler who took the mic. He confessed he was nervous and chuckled when he had trouble pronouncing the word "organization." Jeremy Guthrie poked fun at him a few minutes later for his gaffe. But what Butler said that was intelligible and heartfelt was this:

"We couldn't have done it without you guys. You guys treated us like royalty. You guys are tremendous. We love you and that's why we're out here."

To which, of course, the crowd cheered.

When Lorenzo Cain had his opportunity to speak, his 'brother' (and at time arch nemesis) wasn't far behind. Salvador Perez leaned into the mic before Cain could speak and said something in Spanish. Cain chuckled before taking control of the situation, asking if Perez was going to post his shenanigans on Instagram. When he finally addressed the crowd, Cain was upbeat and declared victory in 2015.

Moments later Nori Aoki stole the show when he stole the microphone from sportscaster Ryan Lefebvre.

"You the best!" he shouted. "Thank you so much!" His enthusiasm and love for fans was evident not just in his voice, but his expression too. (See video of that moment below.)

Royals manager Ned Yost also spoke at the rally, saying the team fully intended to bring back a world championship to the city.

"The one thing that we will remember most about this year when we get older is going to be our individual achievements, but most of all we’re going to remember you," Yost told fans.

Later Yost spoke with reporters at a news conference, and when asked if he had any regrets, he responded emphatically.

When asked more specifically about the decision not to wave Gordon home with two outs in the ninth inning, Yost replied:

"To just blindly hope with luck that we can score a run doesn't make any sense," he said.

He also said his brain was fried.

"I think the country has had the opportunity to get to know these guys, see what they're about. This organization has made a lot of new fans throughout the country," Yost said. "The country got an opportunity to see that Kansas City is a phenomenal baseball town."

Yost said he's extremely proud of the team -- both on and off the field.

"There's always a wart or two, always somebody who doesn't fit in, who doesn't buy in to what you're doing. There was none of that here."

The Royals will be back on Opening Day on April 6. Kansas City fans will be ready.