OLATHE, Kan. — The man accused of dismembering his wife’s body in a Kansas City hotel room is asking for the case against him to be dropped, but the motions filed into court on Thursday were unlike most every other motion seen by the Johnson County Court in a very long time.

Last month a judge found Justin Rey to be incompetent to stand trial and ordered that he go to Larned State Hospital for 90 days to get treatment.

On Thursday, Rey filed eight motions, handwritten on notebook paper. One asked for charges, as well as the mental evaluation to be dismissed.

“(I) am sorry for any and all of my outbursts in court, please forgive me your honor,” Rey wrote in one of his appeals. ” I just lost my wife to passing on, then all this, I have children to save and am being forced to be apart from my two-year-old and newborn children and we just lost their mother.”

The motions include a: 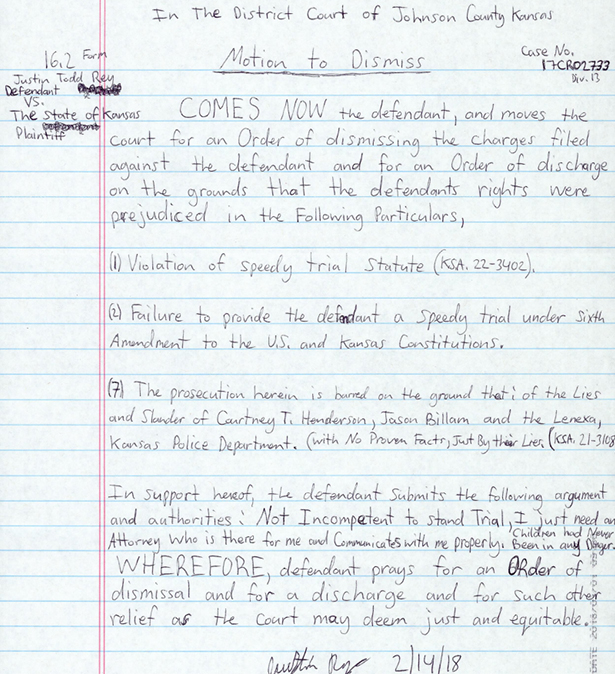 “Due time is of an essence, I have children in need of my care and need to have all this cleared up  so I can stand trial and or we can work out a plan,” Rey wrote in his motion to summon the judge.

He has been charged with abandonment of a corpse and endangering the welfare of a child.

According to court records, police believe Rey’s children were in the Kansas City hotel room as he dismembered and disposed of their mother’s body.  Jessica Rey’s body was found inside a cooler at a Lenexa storage facility on Oct. 24.

When he was arrested, police said Rey told them his wife delivered their baby in the bath tub of a hotel room near Interstate 70 and Stadium Drive, where they’d been staying since Sept. 25.  He told them he used a plastic fastner and a shoe string to secure the umbilical cord. He told police she died after childbirth and he placed her in the bed and then took pictures with his wife and kids together.  He says he spent two days with her body, Friday and Saturday, before dismembering her and then taking her body in the cooler to the storage facility in Lenexa.

Detectives say Rey admitted cutting up his wife Jessica in the bathtub and then putting her body parts in the cooler. What didn’t fit in the cooler, he said he flushed down the toilet or boiled in a pot on the stove.

Lenexa police were tipped off about Rey after the U-haul Storage Facility contacted them. They said he was suspiciously talking about his wife dying while giving birth to their newborn.  When police found him at the storage facility, they say he told them his wife had died from suicide after giving birth.

‘The suspect spontaneously informed the officers his wife was inside the cooler and looked to the direction of a red and white Igloo style cooler with wheels,’ the probable cause statement said.

Rey is also a suspect for the murder of Palm Springs resident Sean Ty Ferel. According to the Palm Springs Police Department, Ferel was reported missing after he went on a vacation with Rey in 2016 but was overdue in returning home. Through the investigation, police determined several thousand dollars had been spent on Ferel’s credit cards. Surveillance video footage showed Rey using Ferel’s credit cards — at one point wearing a disguise — in a Walmart, a Walgreens and a Flying J gas station. Friends and family said they had not seen or spoken to Ferel for more than two weeks. Friends of Ferel marked a change in the way he would respond to text messages, which led them to believe it wasn’t Ferel sending the messages.

Several months later, police learned Rey had been in a crash in Ferel’s car in Los Angeles. Palm Springs police went to Los Angeles where they interviewed Rey about Ferel’s whereabouts.

Rey had Ferel’s phone and other property, police said. The department’s crime scene unit also found blood in Ferel’s trunk, which was later confirmed to be Ferel’s blood.

Police also issued a search warrant for a storage unit that was issued to Rey in Arizona, where they found several laptops, electronics, Ferel’s wallet, credit cards and other personal belongings.

Ferel’s body has still not been found.

Rey is scheduled to be back in court next week in Olathe, Kan. 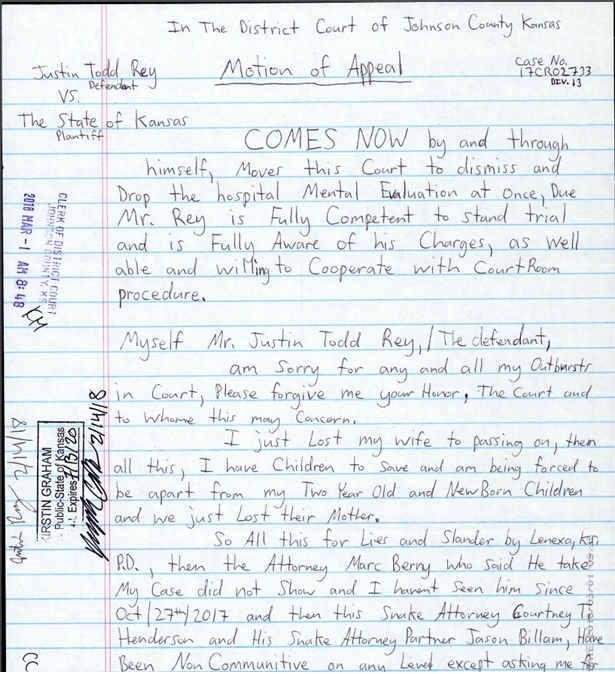 Investigation underway after hundreds of packages found ‘thrown off ravine’