OVERLAND PARK, Kan. — A Kansas man was sentenced to life in prison for murdering an Overland Park woman.

Korrey Rinke, 26, of Ottawa was sentenced for the 2016 kidnapping and murder of Julianna Pappas. He pleaded guilty to first-degree murder and aggravated kidnapping charges in June. 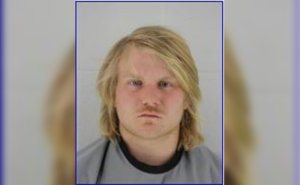 Pappas was reported missing by her roommate on Aug. 22, 2016. Her body was found Aug. 31, 2016 in a wooded area south of W. 115th between Switzer Road and Indian Creek Parkway in Overland Park.

According to court documents, Rinke was seen tampering with an electronic bicycle that belonged to Pappas.

When police first spoke to Rinke they claim he seemed nervous and denied that Pappas was in his car, then admitted she was in his car.

In a follow-up interview with Rinke, police say they read him his Miranda rights and he agreed to tell them about Pappas. Police say he told them that he and Pappas had been driving around together and purchased alcohol. According to the affidavit, he told police they were going to have sex, but she later refused.

Rinke then admitted to police that he forced her to have sex. Police say he admitted punching her and believed he broke her arm when he assaulted her.

He said he left her in the park injured. Police say Rinke told them he did not believe she would survive her injuries.

According to police, Rinke went back to the area four days later to make sure she was dead, but could not find her.

As part of his plea, Rinke must serve at least 25 years of his sentence before he is eligible for parole.

KANSAS CITY, Kan. -- A shooting in Kansas City, Kansas has left one man fighting for his life Friday afternoon.

Police were called to the area of 12th and Central Avenue on a reported shooting around 1:45 p.m.

BUCHANAN COUNTY, Mo. -- Officials have identified the body of a woman who was found in a bag, which was lying in a ditch in rural Missouri.

The body of Ariel Anne-Rae Starcher, 21, was found along Vincent Road on Tuesday, Feb. 18. Starcher is from Independence, Missouri.

OVERLAND PARK, Kan. -- Police are looking for a man reportedly missing since February 17.

Reports state Christopher "Chris" Boswell was last known to be driving a 2015 Ford Escape, similar to the one picture in the post. The vehicle is damaged over the driver's rear quarter panel.