Worries about the health of the US economy have gripped investors after a worse-than-expected report on America’s manufacturing sector threw markets Tuesday. The Dow and the S&P 500 recorded their worst day in more than five weeks in response, and Wednesday isn’t shaping up to be any better. 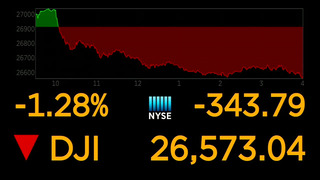 Tuesday’s report by the Institute of Supply Management showed America’s manufacturing sector contracted for a second month in a row in September. The index, which measures month-to-month changes in the industry, dropped to its lowest level since June 2009.

“Up until now, the US manufacturing and other sectors of the economy had remained resilient despite weakness in other economic regions like the Eurozone and China… but now investors are worried that the largest economy has also caught the cold,” Razaqzada said.

In more disappointing data, private payrolls for September undercut expectations earlier Wednesday. The report also sharply revised the August numbers down, which is adding some nervous tensions ahead of Friday’s US jobs report.

So far, American consumers have kept the economy roaring, in part because the country is near full employment. Should this change, GDP growth could get hit.

HOUSTON -- A 10-year-old boy was accidentally shot by his babysitter when she was taking selfies while holding a gun, a Texas sheriff's office said.

The boy was taken to a hospital in critical condition, but is recovering.

COBB COUNTY, Ga. -- Police officers stepped in to save the day after Girl Scouts were robbed of their cookie money. It happened on Friday outside of a metro Atlanta Kroger, WGCL reported.

“I was really upset, and I was like, ‘how could someone do this, especially to girls my age?’” 13-year-old Haley Rolnick said.

KANSAS CITY, Kan. -- About 60 students learned about the risks involved in vaping during a town hall gathering Thursday at Sumner Academy. Doctors are pushing for more restrictions on vaping products. Physicians at the University of Kansas Cancer Center are worried about the future of nicotine addiction. There have been about 70 deaths in the United States from acute lung injuries attributed to vaping. Doctors warned teens about marketing…