KANSAS CITY, Mo. — You might have seen scarves, hats, and gloves hanging from trees, fences, or even left on benches around the metro.

A woman who went by #DeeKC remained anonymous, leaving these items out for those in need — until now.

“Recently, I put a bunch in my hometown of Independence on the square, and someone took a picture of it and shared it on an Independence Facebook page, and it went crazy!” Dee Clark said.

Everyone was trying to figure out who #DeeKC was — that is, until one of her friends spilled the beans. 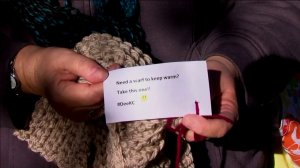 Now the secret’s out: Dee Clark is the woman behind the gloves, hats and scarves.

“I have a little piece of paper that says, ‘Do you need a scarf? Take this one,’ and #DeeKC,” Clark said.

Clark has been crocheting since she was eight years old.

“When my son was little, I used to crochet little things to give to his classmates, and they all seemed to enjoy it,” she said. “When I had extra yarn, I would make hats, and I went downtown and saw a lot of homeless people with nothing on their heads.”

So she made some and gave them to City Union Mission.

“All of a sudden, I started seeing my hats, and it just made me feel so good,” Clark said.

But since then, the 65-year-old has had some extra time. She’s been retired for almost four years now.

It takes her a couple hours to make each one, so she crochets while watching TV.

Clark said she usually doesn’t see who gets her items.

“I just leave them and go on,” she said.

But she continues to leave them all over town — on fences, in parks, at bus stops and more.

“Last Tuesday, when I left the ones on the square, I saw an elderly gentleman walking across the street,” she said. “It was about 32 degrees. He saw the scarves. He tailed it as fast as he could go with his cane and went over there to grab one of the scarves and put it on. “That made me feel good. That’s really the first time I’ve ever seen someone actually receive the scarf and use it. I just feel like you need to pay it forward when you can.”

Clark said the items are for anyone who wants one, so if you see one around town and want it, or know someone who could use some warmth, take it!