KANSAS CITY, Mo. -- It's been one year since the 911 calls started pouring into dispatch and police found three people shot and two beaten inside an upscale south Kansas City neighborhood. All five died in the violent spree, leaving a Southside neighborhood in shock.

On the anniversary, neighbors and friends gathered to honor the victims with a permanent memorial, which Woodbridge residents say they put their hearts into designing.

Dozens turned out for a ceremony, also to unite as a community and heal from tragedy. A beautiful space glistens in the sun, bearing the names of Ann Taylor, George Taylor, Susan Choucroun, Lorene Hurst, and Darrell Hurst. Prosecutors say they were killed by Brandon Howell, who was intent on stealing a vehicle and eliminating witnesses at any cost. Last week, the Jackson County prosecutor announced she would seek the death penalty against Brandon Howell, whose trial begins September 25.

"These people, even though they're gone from this earth, they still are remembered and live on right here as far as I'm concerned," said Woodbridge homeowners’ association president Rick Mayer. He addressed dozens of residents, and city leaders during the unveiling.

Folks briefly reflected on the tragedy that brought them there, and that lead to an infinity symbol of the Woodbridge community's resilience.

One year ago, this normally peaceful neighborhood was transformed to a scene of chaos, with dozens of police and other first responders trying to track down a killer and help victims. Rick Mayer says even hours after the tragedy, residents proved fear following the shootings wouldn't define them.

“The day after the murders happened people were out walking their dogs like they usually did," said Mayer.

Now the Woodbridge community has a way to honor those lost, every time they come and go, plus a reminder to move forward.

The homeowners association says the memorial was paid for entirely by the generosity of residents and area business, and cost the community about $10,000.

The monument was only finished last week and yet, someone has already vandalized it. A series of plants encircling the monument were stolen and have yet to be recovered.

Ann and George Taylor were severely beaten and died as a result of their injuries The gunman stole the Taylors' SUV and also shot and killed Lorene Hurst, 88, her son, Darrel Hurst, 63, and neighbor Susan Choucroun, 69. 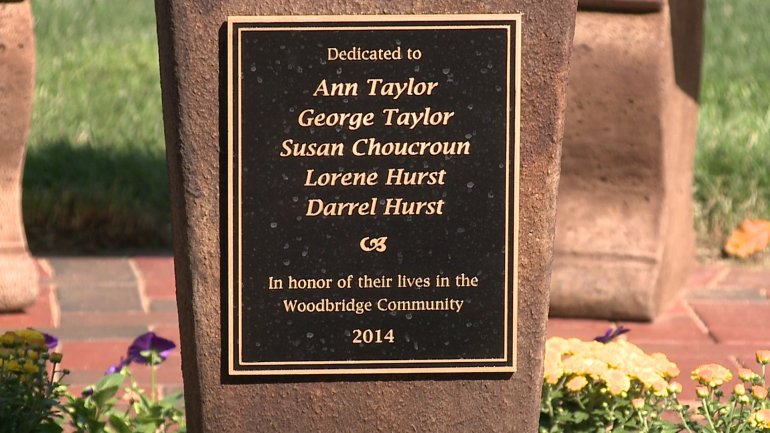 "There's obviously been a lot of stimulus put in the system over the last couple bills, and so the price tag for us would be that," Marc Short, Pence's chief of staff, said during an interview on Bloomberg Radio.

CAPE GIRARDEAU, Mo. -- Police have issued an arrest warrant after they say a man randomly attacked and hospitalized a 12-year-old who was dancing downtown on July 3.

Cedric Charles Moore, Jr., 27, was charged on June 6 with 2nd degree assault and 1st degree child endangerment, both felonies, according to a statement by the Cape Girardeau Police Department.

ST. LOUIS — Wildlife officials have relocated a black bear that had wandered into a St. Louis suburb and drew a crowd of hundreds curious to see the out-of-place animal.

The bear, dubbed "Bruno," has been popular on social media pages for weeks as it plodded hundreds of miles from Wisconsin, through Illinois and briefly into Iowa before wandering into Missouri. More than 155,000 people have joined the Facebook group “Keeping Bruno Safe," where fans have been taking and posting videos and pictures of his journey.