DALLAS — Tuesday afternoon, about 2,000 gathered for a memorial  service for the fallen officers killed during a rally in Dallas last week.

Dallas police officers and other first responders were among those filling the 2,000 seats in the Morton H. Meyerson Symphony Center, along with the families of the officers killed and injured in last week’s attack and two civilians who were wounded.

President Barack Obama cut short a trip to Europe to visit Dallas, and his predecessor, one of Texas’ favorite sons, George W. Bush also spoke at the service., as well as Dallas Mayor Mike Rawlings and police Chief David Brown.

The deaths of Smith, Ahrens,  Zamarripa, Krol and Thompson came amid a tragic week for the nation that saw Alton Sterling in Louisiana and Philando Castile in Minnesota killed during encounters with police.

The Dallas officers were fatally gunned down Thursday by a sniper, an armed-to-the-teeth Army veteran who targeted the officers, perhaps as retribution for police violence largely unrelated to north Texas. Police are still working to nail down an exact motive.

“None of us were prepared or could be prepared for an ambush by hatred and malice. The shock of this evil still has not faded,” former U.S. President George W. Bush said Tuesday as he called for unity at a memorial for five slain officers in Dallas. “At times, it seems like the forces pulling us apart are stronger than the forces binding us together. Argument turns too easily into animosity. … Too often we judge other groups by their worst examples, while judging ourselves by our best intentions.”

Pres. Obama has acknowledged the sorrow, anger and confusion over recent events in the country, and he has urged Americans to use the violence as impetus to unify and cautioned them against viewing the Dallas shooting as some microcosm of the country’s problems.

.”I believe our sorrow can make us a better country. I believe our righteous anger can be transformed into more justice and more peace. Weeping may endure for a night but I’m convinced joy comes in the morning,” the President said.

An interfaith choir opened Tuesday afternoon’s service and the Dallas Police Choir performed the national anthem. An imam, rabbi and Methodist reverend from the area delivered an interfaith prayer before the speakers took the podium. 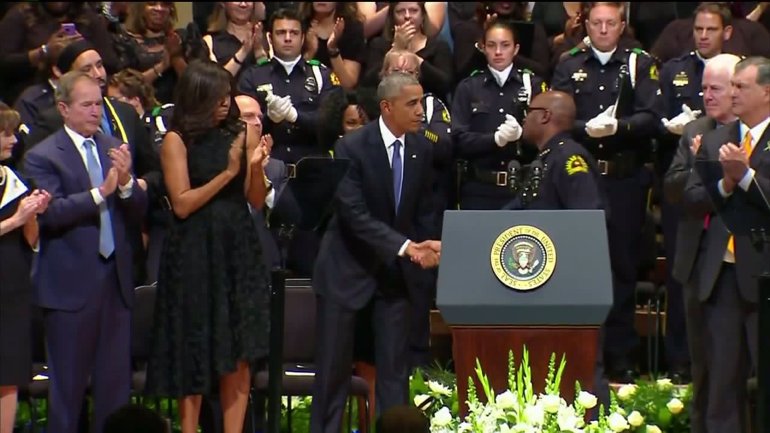