One Ohio establishment seems to have found a way to cut through the noise by serving a cocktail with a tampon inside.

Sarah Krueger likes to get creative when it comes to cocktails at Yuzu.

“We have Tequila, Triple Sec, a random flavor of Truly and then we have the berries.”

The popular westside establishment drawing in large crowds, but also drawing fire from people on social media at her latest creation called “Even Can’t Literally.”

A berry margarita that embodies the menstrual cycle. Complete with a tampon applicator garnish.

“I’ve definitely seen offensive, crass disgusting. And I’ve seen most of these posts by women, saying ‘I can’t believe you would do something like this,’ which I find a little bit disheartening almost because it seems like you are ashamed of something your body does naturally,” Krueger said.

Krueger said this drink isn’t meant to shock or disgust people but to get them talking about women’s health.

One dollar from every purchase will go to the Domestic Violence and Child Advocacy Center in Cleveland. 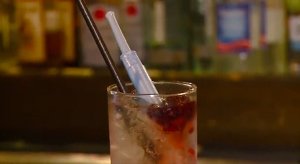 “We also decided that if someone doesn’t want the actual tampon in their drink, they can donate that tampon as well,” Krueger said. “They can get the drink and say ‘donate the tampon we just want the drink’ and we’ll still donate the dollar to the women’s shelter.”

Most bar patrons found no problem with the new cocktail but social media was a different story.

Hundreds voicing their frustrations on the bar’s Facebook page saying things like “this is revolting,” and “I met my boyfriend here and hoped that we could have an anniversary celebration here but after the fentanyl stunt and now this, I can only hope you get run out of business.”

Another says “Round of applause Yuzu! I didn’t think it was possible, but you guys took a charitable cause for women and still managed to degrade female bodily functions and mock female vernacular with the drink name.”

The bar’s owner Dave Bumba said some people even complained to the health department. He said he spoke with them and everything is fine. Also adding, if this controversial drink gets more help and attention for local shelters, he’s all for it.

“I think that maybe some people obviously know that women’s shelters need tampons, but I think a lot of people might not have even known that that’s a thing that’s common to donate. So this is kind of like a small association to help bring awareness,” Bumba said.

Yuzu got plenty of backlash in February when it posted a picture showing a bag full of fentanyl pills on its Instagram account. The picture also contained a satire of the Captain Crunch “Oops, all berries” cereal with a picture of the character saying “brunch” and the words, “oops, all fentanyl” underneath it.

OKLAHOMA CITY — Video of an Oklahoma detention officer who quit when he wasn't allowed to take a knee with protesters has gone viral on social media.

"Take my badge, and I won't come back,” the unidentified officer said.

Devils Backbone Brewing Company is accepting applications for what it calls its "chief hiking officer."

ST. LOUIS – Looters shot and killed a grandfather and former St. Louis police captain as the 77-year-old tried to protect a pawn shop when protests turned violent this week.

David Dorn's body was found in front of Lee's Pawn & Jewelry around 2:30 a.m. on Tuesday.