KANSAS CITY, Kan. -- A metro family is asking the public to be on the lookout for their mother’s wedding rings, which disappeared from her nursing home around the time of her death.

“That’s a long time to be married to a person,” said Gail Jaques, the couple’s daughter. “Dad was stationed at Camp Pendleton in California, and they went on a blind date.”

The couple spent the last two years of their marriage at Riverbend Post-Acute Rehabilitation in KCK. It’s where Wanda lost her battle with Alzheimer’s disease last Sunday at the age of 82, and Robin found himself looking for something he gave his wife decades ago: her wedding rings.

“We looked everywhere, and they’re nowhere to be found,” their daughter said.

Gail said her mother never took her rings off.

“Even when she bathed or did dishes or working, she never took them off,” she explained. “After all this time, why would they all of a sudden be missing?”

Both rings are gold. One is simply a wedding band. The other is Wanda’s engagement ring, which has diamonds. Gail said they’re likely not worth much, but the sentimental value is priceless, especially to her father. 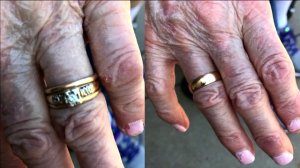 “With mom just passing, he wants something that was hers, something he gave to her many years ago, so he wants them back,” she said.

Gail said her father is depressed and sad. The 86-year-old thought he’d go before his wife.

“It’s just hard time for all of us, losing my mom. My dad losing his wife of 63 years. It’s not something easy to go through,” she said.

The family doesn’t blame the nursing home, which Gail said conducted its own investigation into the missing rings.

“We feel like they did what they could do to try and find them,” she added.

They’re hoping someone knows where they are and will find it in their heart to return them -- no questions asked.

“Come forward so that way the family can move on, knowing that they’ve been found, and my dad has them back,” Gail said. “It’d mean the world to us.”

The Hamblin family is offering a reward for the rings’ return. They would like to have them back before they lay their mother to rest on Tuesday. If you have any information, call Gail at 913-213-8630.

FAUCETT, Mo. -- The Buchanan County Sheriff’s Department is now investigating a homicide. A woman’s body found Tuesday in a ditch along Vincent Road near V Highway.

A Missouri Department of Transportation worker spotted the bag Tuesday afternoon and thought, for some reason, there might be a body inside.

JOHNSON COUNTY, Kan. -- The Johnson County Sheriff's Office is investigating after one person was killed in a single vehicle crash Wednesday afternoon.

Police responded to the crashes shortly after 5 p.m. Responders told FOX4 the driver of the truck first drove into a house on 20th and Spruce.

Family dog, Buddy, stayed with 3-year-old boy who got lost in Florida woods

A new use for McDonald’s used cooking oil: 3D printing

Family dog, Buddy, stayed with 3-year-old boy who got lost in Florida woods