JACKSON COUNTY, Mo. — Dinna Baker and her family adored everything about their 2-year-old dog, Jax.

“He had a big, huge personality that commanded attention from everyone. He slept with us every night in our bed. Holidays and things like that, he was super engaged, and that’s what made him so special,” Baker said with tears in her eyes.

Now, the family is heartbroken.

“He was not just a pet. He was one of our family members. I can’t bear the pain of him being gone,” Baker said.

“He was my beautiful brother. My son. My everything. His personality was so great, so kind, so loving,” Wes Chambers said.

Chambers said last Friday he rushed to their home in Jackson County after getting a heart-wrenching phone call from a neighbor across the street.

“She told us that sheriff’s deputies were at the house. I ran inside, went to the stop of the stairs and couldn’t believe it,” he told FOX4.

He said he found a scared Jax bleeding, in pain and hiding in their bathtub. 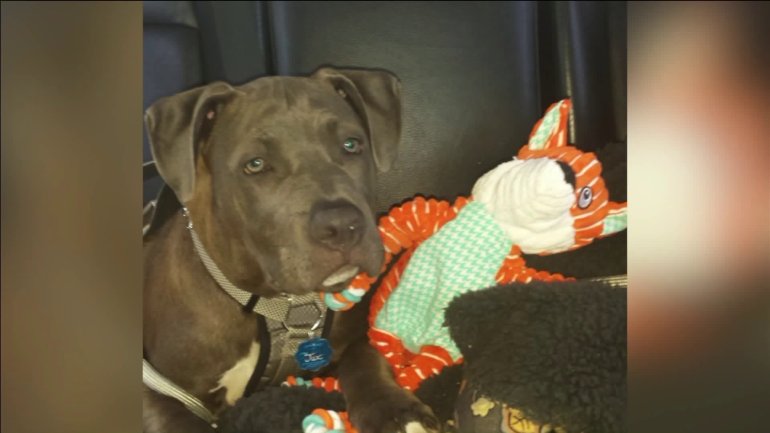 “Just to see the scene. The house was tore up with blood everywhere. I mean I’d never seen anything like that in my life,” Chambers said.

He said sheriff’s deputies told him his next-door neighbor, 68-year-old Kenneth Haen, shot his dog in the owners’ backyard.

“He charged the fence. He splintered it,” Haen said.

Haen said he was in his backyard, pulling up dandelions with a poker, when the 70-pound dog repeatedly barked at him and pushed against his 6-foot tall, wooden privacy fence.

“His head was pushing through. My cat was growling at him. I thought he was going to attack me and my cat. You damn right I was scared for my life,” Haen said.

Haen admits he first hit the dog with the dandelion poker.

“I  know he was gonna come through that fence. I was just trying to deter the dog. But when he didn’t back down, I got my gun out of a case and shot him once,” Haen said.

He shot the pit bull in his face.

Jax’s owners had him put to him down because of his injuries.

“Anyone who shoots a dog at point blank range in the face is cruel and in-humane,” Baker said. “In our eyes, he had no reason to shoot him. The threat wasn’t there. Our dog was not vicious. Jax had never gotten out of our yard. He’s never attacked anyone. He’s not telling the truth when he says he feared the dog would get through the fence. Jax could not bust through that fence.”

“I don’t want to shoot anybody’s dogs,” he replied. “He came and rushed the fence. He’s been hitting my fence for quite some time. He wouldn’t get back, and he was just crazy. I had no choice.”

Jax’s owners also have an 11-year-old German Shepherd. The family said the sudden loss of Jax is so devastating that they’re now planning to move.