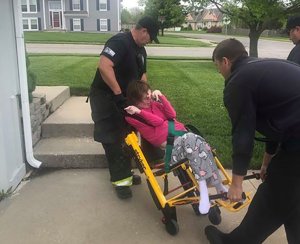 Shelly Meyers said her 27-year-old daughter Breeanna has cerebral palsy and has been living in a group home.

Meyers, who has nine children, said they moved to their home in Raymore two years ago.

“I haven’t brought her home because of the two flights of stairs to get to my main level,” Meyers said.

Meyers said she decided she was going to bring Breeanna home for the weekend and for the first time so she could spend Sunday with all her kids. She said not knowing how to get Breeanna upstairs to her living room, she called for help from the guys at the South Metro Fire Department.

“I finally just said I’m going to bring her home and I’d deal with those stairs once and for all.”

Meyers said it has made her Mother’s Day the most memorable one yet.

“We are so truly blessed to have our first responders we truly are,” Meyers said.

“Those men became our angels. I’m the happiest momma alive.”