RAYTOWN, Mo. -- On Saturday, a metro man tried to place flowers at his relatives' graves for Memorial Day weekend, only to to realize the vases were gone.

Scott Bundi thinks they were stolen from the Floral Hills Cemetery in Raytown.

"It's kind of shocking that someone would take something so personal, so private," Bundi said.

Four of his relatives are buried together by a tree at the cemetery, and on Saturday, Bundi noticed that two of the four graves were missing vases. 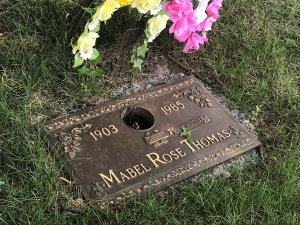 "This is my great-grandmother, and she was out with me when I was a child putting flowers on these graves, and it just bothers me that hers was stolen," he said.

Bundi contacted the cemetery and said he was told because he bought the vase from Floral Hills, it would be replaced.

The general manager for Newcomer Floral Hills, Justin Scholz, told FOX4 they do inspect all reports of missing vases and replace them. Although Bundi said he noticed at least 10 other graves with missing vases, Scholz said it's not a widespread issue.

He said he doesn't know if the vases were actually stolen because no one saw the crime.

"It's a desecration of a grave in my opinion," Bundi said.

When FOX4 was at the cemetery, we tracked down workers who took down Bundi's information and information about the graves. He feels confident the vases will get replaced, but he's still disappointed to see his family's final resting places missing something.

"It's just frustrating to think that someone could come and pull that off to turn it in for money," Bundi said. "It's just almost sacrilegious if you will in my opinion."

Floral Hills said they do not have security at the cemetery.