PRAIRIE VILLAGE, Kan. -- "Driving high? Kiss your license goodbye!" That's what law enforcement agencies in six states, including Kansas and Missouri, are using as the slogan for a new impaired driving enforcement campaign.

They say with Friday being April 20, or 420, a day associated with smoking weed, it's a good time to raise awareness about the risks of driving high.

McCullough said disobeying the rules of the road by doing things like swerving and breaking hard for no reason can indicate driving while high on marijuana.

"It reduces your reaction time, distorts your perception of time and space," McCullough said.

The Prairie Village Police Department doesn't do any blood or saliva testing for drugs on the road. If they suspect someone is driving high, an officer will conduct the same field sobriety tests they would on a drunk driver. 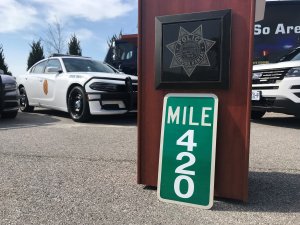 The department has about a half dozen officers with advanced certifications that allow them to do an extra layer of testing and recognition.

"Romberg's Test, essentially what they do is have them stand there with their feet together, tilt their head back and close their eyes, and they`re gonna estimate the passage of 30 seconds," McCullough said.

Officers say how fast or quickly someone thinks that time passes can help determine if they've used drugs. McCullough said he and his officers have seen more high drivers recently.

"I would say that yes, it has gone up especially with the legalization in Colorado," McCullough said.

McCullough said if someone fails the tests, they can be arrested. The drivers can either consent to a drug test, or police can get a search warrant for one. According to McCullough, high drivers are usually released the same day and charged when results of the lab rests come in.

According to the Centers for Disease Control and Prevention, nighttime weekend drivers with marijuana in their system went up 4 percent from 2007 to 2014.

Officers remind people if you are impaired at all, arrange a ride and have someone else drive you. Driving high is considered a DUI/DWI and can have the same legal consequences as driving drunk.

OLATHE, Kan. -- A vehicle struck and killed a man walking in a parking lot early Monday morning, Olathe Police said in a news release. The incident happened around 1:56 a.m. near 127th and Kansas City Road. Police said the man died at the scene. The truck driver was not injured and remained on the scene. If you have any information regarding this investigation, please call the Olathe Police Department…

KANSAS CITY, Mo. -- A Grandview man is behind bars, connected to a series of crimes against women.

Officers responded to a reported shooting near NW 64th and North London around 9 p.m.