OVERLAND PARK, Kan. – A Johnson County teen says she was discriminated against, labeled as disabled and denied an opportunity at the Scheels in Overland Park.

Her mother said the popular sporting good store has no written policy to prevent it from happening again.

Eighteen-year-old Kathryn Embry has Down syndrome, but she has no problem keeping up with her girls on the Blue Valley North soccer team.

“I really like them being on my team because they’re amazing,” she said.

“She’s our manager, and she keeps the team in line,” her longtime friend Emily Kramer said.

Emily and another friend, Morgan McGruder, were the first to go to bat for Kathryn after a class field trip to Scheels last week.

“It made me really upset because I know that Kathryn is an amazing girl,” Morgan said.

“Kathryn’s mom said the school could not do anything, so that just made me really angry,” Emily said.

The girls teamed up with Kathryn to record a video of what she said happened on the class trip.

“I tried to go on the Ferris wheel with my buddy, but they said I can’t because I have disabilities,” Kathryn said.

Students said the class is half made up of kids with special learning needs and half peer students who work with them. They said they usually ride the Ferris wheel in pairs.

That night, Kathryn’s parents got Scheels on the phone.

“The store manager at the time said he hadn’t heard about the incident, but he could confirm they had a policy that everybody needs to be able to understand and follow the rules,” her mother Karen Embry said.

That is the first rule on the posted list at the ride.

Karen’s issue is that no one ever asked Kathryn if she understood, and the staff that day didn’t cite that rule. Karen said they told the group something different.

“They said everybody with disabilities in the group, you need to have a person who’s an adult chaperone,” she said.

Karen never got a copy of any written policy from the company, and FOX4 couldn’t find one when researching Scheels online.

“The thing is, Kathryn has Down Syndrome, so you can look at her and see that she has a disability,” Karen said. “But it says nothing about what her capabilities are. She can read the rules. She can follow the rules.”

“Just because someone might look different than someone else you shouldn’t assume their capabilities. Kathryn can do anything we can do,” Morgan said.

The group understands Scheels may have safety concerns, but her friends take issue with the inconsistency. 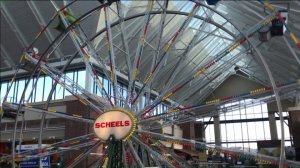 “I’ve been on the Scheels trip before. They’ve let other students with disabilities ride with peer tutors,” Emily said. “They told her she couldn’t even ride with a peer, with another student, which is just outrageous.”

Kathryn did get to ride that day. But they only let her on with an adult chaperone even though Kathryn is 18.

Ultimately, her supporters said it’s not about the ride.

“It’s more than just the Ferris wheel,” Emily said. “It’s the fact that they looked at her and discriminated against her because of how she looked. She is our good luck charm, so we had to help fight back for her.”

“We’re not here about a boycott and shut down a business that’s been very generous in our community,” Kathryn’s family said. “We’re about educating — not just the community at large, but business — about how even if it’s unintentional, it’s still illegal and it’s still wrong because it perpetuates stereotypes and it hurts a population, especially who are hitting this young adult stage.”

Karen said they’d appreciate an apology and a change of policy.

As of Tuesday evening, Scheels had not responded to FOX4’s phone calls and messages.

The Blue Valley School District said in a written statement:

“We are proud that Blue Valley employees have the best interests of our students at heart. The physical and emotional well-being of our students is always a top priority. We appreciate the efforts of our community partners to keep our kids safe through equitable practices.”