RAYTOWN, Mo. -- When some people take a look at the newest American Girl Doll, they'll just see a doll. But for Dorinda Nicholson, she sees a symbol of something much bigger.

“The American Girl Doll, Nanea, which depicts what it was like to be me and others like me,” said Nicholson, an author of four books and a member of the advisory panel for the new doll. 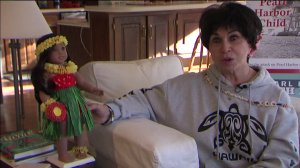 Nicholson said Nanea’s appearance is authentic to the era in which she grew up. Nanea, which means "to make peace," represents Nicholson’s struggles and triumphs when she lived in Hawaii -- a precarious place to live during World War II.

Nicholson said her family’s home was just a few hundred yards from where Pearl Harbor was attacked. She was just six years old at the time.

“The morning of the 7th, when the enemy bombers came over our house -- so low, just barely above the tree tops and above the house top -- I could see the pilots, and I could see the goggles that covered their eyes,” the 82-year-old said.

From going to school carrying, and sometimes wearing, a gas mask, to her father pulling bullets out of their kitchen wall, Nicholson has taken those experiences and turned them into books aimed to help anyone going through adversity.

It’s a reach she hopes will touch thousands of children and families for many more years to come thanks to Nanea.

“Symbols can help us through a lot, so this is a symbol that will mean more to me than it would to other families," Nicholson said. "But I'm also hoping this symbol will open some doors that I might share more with other students in our country."

Nanea was released on Aug. 23. Proceeds raised from now until Christmas will be donated to the Military Armed Services Division of Red Cross. An additional 5,000 dolls will also be distributed to different Red Cross chapters across the country.

KANSAS CITY, Mo. -- Protesters gathered on Sunday at the Country Club Plaza to decry police brutality in local cases and notably in Minneapolis where George Floyd died in police custody last week. With an 8 p.m. curfew in place, Kansas City leaders applauded protesters for their behavior during a briefing around the time the Plaza, Westport, Downtown and Kansas City parks closed to the public.

But as the sun set, tensions rose and the scene at the Plaza looked eerily familiar to the violent Saturday night that preceded it. Some in the crowd lobbed water bottles at officers, who deployed tear gas as they declared an unlawful assembly and began trying to clear the area.

KANSAS CITY, Mo. -- A man has been killed Sunday night after a shooting near the Country Club Plaza in Kansas City. Police say the deadly shooting happened near 46th Street and Warwick Boulevard. KCPD said it's unclear at this time if it's related to the protests going on Sunday night at the Plaza. Details about what led up to the shooting were not immediately available. Anyone with information is…