KANSAS CITY, Mo. — Police say a 12-year-old Kansas City girl has been found safe after she reportedly ran away Sunday.

Police said Gillian A. Swain is home safe with her family and thanked everyone who kept an eye out for her.

KCPD reported Swain missing earlier after she was last seen on Saturday in the area of Green Hills and Barry Road. 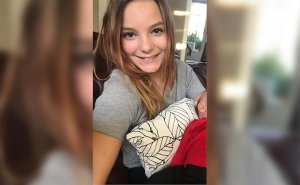 Based on tips, Williams thought her 12-year-old could be with a teenage boy or much older man in his mid thirties or forties.

Her family was very concerned for her well-being and safety.

Swain ran away from home last week. Williams said before that, they’ve never had an issue like this. Leading her to believe Swain is in danger.

“We’re terrified, shaking all day, I haven’t slept in more than 30 hours,” Williams said. “This whole last week we’ve had multiple conversations about things and she cried to me and apologized and we cried together and talked about things so this really did kind of come out of the blue.”

Williams said Gillian had found a way to turn off the App she uses to track her daughter’s location.