CLINTON COUNTY, Mo. — A Wisconsin man and his brother are missing after traveling to Missouri on a business trip on Saturday, July 20.

The last Lisa Diemel heard from her husband, Nick, was Sunday, July 21 at 8:55 a.m. Sheriff Larry Fish of the Clinton County Sheriff’s Office has confirmed an investigation into the disappearances of Nick and Justin Diemel was opened on 3 p.m. that Sunday.

“My husband and his brothers own a livestock company called Diemel’s Livestock,” Lisa Diemel told FOX4. “They went there Saturday, toured farms… and Sunday was the last time I spoke with Nick.”

Clinton County’s statement confirms that the two were in Clinton and Caldwell Counties for business.

Nick had told Lisa he and his brother were going to someone’s house to look at calves, she said. She knew something was wrong when the brothers didn’t get on their 1:50 p.m. flight out of Kansas City later that day.

The Caldwell Sheriff’s Office contacted Clinton County’s office later that day regarding an abandoned vehicle located at a commuter lot in Holt, Missouri, according to Sheriff Fish. This turned out to be the missing truck.

It was “just a standard visit,” Lisa Diemel said.

They are not releasing the name or address of the individual the brothers were going to visit due to the on-going investigation.

Sheriff Fish is asking anyone with information contact Clinton County’s TIPS line at 816-632-8477. He said he will continue to provide updates as the department gets more information. 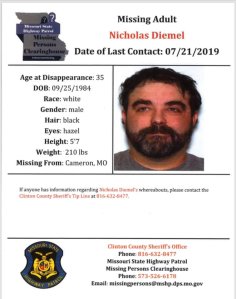 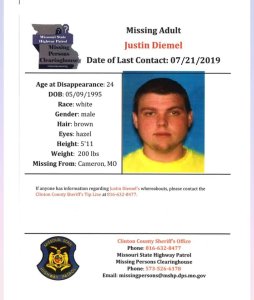