Devonte Graham added 16 points and Malik Newman had 13 for the Jayhawks (18-4, 7-2), who celebrated the Kansas Day holiday with their seventh straight victory over their biggest conference rival.

It was the first time in four meetings that the outcome was decided by more than three points. 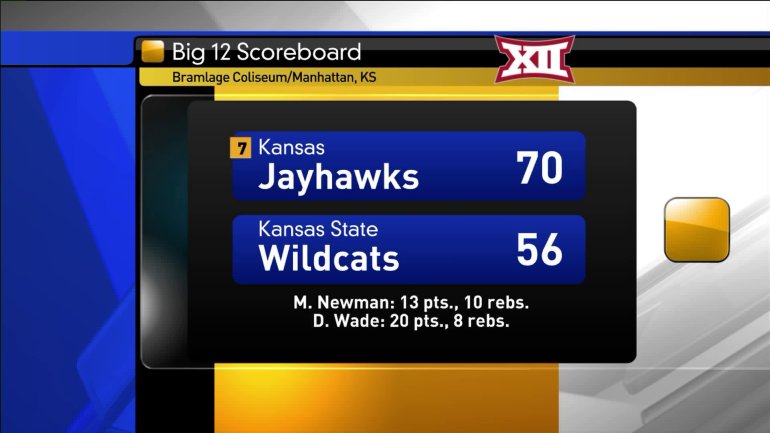 Dean Wade had 20 points and eight rebounds, and Xavier Sneed scored 10 for the Wildcats (16-6, 5-4), who had their four-game winning streak snapped. Leading scorer Barry Brown was held to nine points — about half his season average — on 4-of-16 shooting and 0 for 4 from the 3-point arc.

The Jayhawks raced to a 15-4 lead in the opening minutes, seizing control by hitting 12 of their first 14 shots. But the turnovers began to mount — they had 12 by the break — and that allowed the Wildcats to whittle into the lead midway through the half.

Kansas State missed its final 11 field-goal attempts, though, and trailed 40-27 at the break.

The same rim that seemed to have a lid on it for the Wildcats was just as vexing for Kansas, which missed its first 11 shots out of halftime. It wasn’t until Mykhailiuk knocked down his third 3 of the game with 12:42 left that the Jayhawks finally converted from the field.

The Wildcats had problems of their own: Sneed, one of their leading scorers, spent a long stretch on the sideline as trainers tried to work out a cramp in his left leg.

Kansas State got the lead down to single digits several times down the stretch, ultimately closing within 59-50 when little-used guard Mike McGuirl scored with 4 1/2 minutes to go.

Newman answered with a basket at the other end, and Mykhailiuk swished another 3-pointer from right in front of his own bench as the Jayhawks puffed up their cushion one more time.

Kansas coach Bill Self has bemoaned his team’s inability to “step on an opponent’s throat” when it gets a big lead. The Jayhawks failed to put away Kansas State after building an early 15-point advantage, but they did show some ability to put a game away in the closing minutes.

Kansas State took the Jayhawks to the buzzer at Allen Fieldhouse, and will no doubt rue another round of missed chances in the return game. The Wildcats shut down the Jayhawks most of the second half, but they were unable to pull even at any point.

Kansas State heads to No. 15 West Virginia on Saturday.