Amid their grief, there’s also a sense of anger and frustration about how on earth the second one, in March 2018, could’ve happened.

The night of March 6, dispatchers had gotten a call from someone at 306 W. Grandriver St. in Clinton, regarding an attempt to serve a warrant there. The suit says dispatcher Dana Hale, who’d taken the call, left it open on the computer.

One minute later, another dispatcher, Spencer Townsend, had a 911 hang-up call, which Caliber’s system pinged to Allen Street, not far from the Grandriver address. 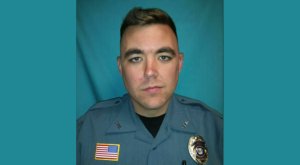 Officers went there, but found an empty lot, and Townsend closed out the call.

Twenty minutes passed when a new 911 call rang in from a landline. Townsend could hear two women arguing, but couldn’t get an address from the call.

At the same time, the suit claims dispatcher Hale was finally closing out the Grandriver warrant call.

The Grandriver address then popped up on Townsend’s computer.

The lawsuit says both dispatchers knew Caliber’s system provided bad address locations on several occasions before and they knew “dispatching police officers to incorrect locations” “exposed” them to “increased risk of harm, including death.”

The lawsuit also says despite those facts, the two dispatchers made no effort to determine if the Grandriver address was correct before sending five Clinton officers there or at any point while they were en route.

What the officers didn’t know then is the call didn’t actually come from the Grandriver address. It originated in Windsor, 20 miles away.

When they showed up to Grandriver to investigate, they were “ambushed by a gunman.” Three officers were shot.

Officer Ryan Morton died, “as his fellow officers were unable to retrieve him from the home. He lay dying due to the ongoing gunfire emanating from the house,” the suit reads.

Since then, Henry County’s 911 software has undergone a major upgrade. Significant address checks have been done and corrections made.

But sources tell FOX4 there have still been instances of wrong addresses being sent to first responders.

The lawsuit is aiming to finally hold someone accountable for what happened to Morton and his surviving colleagues, who say they’ve suffered permanent injuries and psychological trauma.

Court documents accuse the county of failing to properly train dispatchers on obtaining location information, not warning officers that errors had happened and could occur, and not ensuring the 911 mapping system was accurate and up-to-date.

Those are all errors the suit calls “grossly negligent” and “careless.”

Two current and one past Clinton police officer, and the parents of Morton filed the lawsuit. Defendants won’t comment on pending litigation.

The next hearing in the lawsuit is scheduled for Monday.