It’s been four months since a serious car crash left their loved one with a brain injury and unable to speak. They say she’s been neglected at a local rehabilitation center.

When 24-year-old Shaquese Greene’s family checked her into the Highland Rehabilitation and Health Care Center in September, they never imagined she’d be leaving in worse condition.

“We thought that she was up there being taken care of, at least getting decent care,” Shaquese’s brother, Ronnell Greene, said.

They’re all things Ronnell said could’ve been avoided with the proper care at the rehabilitation facility.

“You could tell her trachea, it had like some phlegm or something in there. It needed to be cleaned. The nurse was in there and didn’t do anything about it. We had to ask someone to come in,” Ronnell said.

Similar situations have been cited in a recent Health and Human Services inspection report from May of this year.

The report says the facility failed to establish and maintain a comprehensive infection prevention and control program, didn’t properly administer insulin medication and failed to ensure residents were properly monitored.

“I’m broken. I’m really broken. The accident alone was already enough. The way that it seems that it’s being taken care of, it’s like nobody really cares,” Ronnell said. 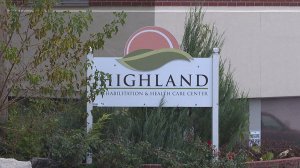 The young woman’s brain injury left her unable to talk and tell her family about her treatment in the facility.

Ronnell said, aside from his sister, his main concern is the other residents still in the care center.

FOX4 visited Highland Rehabilitation and Health Care Center and no one would talk with us. We also reached out several times by phone and email to Highland, along with its parent company, Tutera.

Shaquese has insurance, but it will not cover all of her medical bills. If you’d like to donate, you can do so by following this heading to this Facebook donation page.

FOX4 has reached out to KCPD about the driver of the vehicle who hit Shaquese Greene on 87th and Blue Ridge. They have no information at this time.

Kansas State to take on No. 5 Alabama in Sugar Bowl