KANSAS CITY, Mo. — Some Northland neighbors say they’re fed up with a failing drainage system, and they want to see a solution.

Kevin Wachira, who lives on N.W. Milrey Drive in Platte County contacted FOX4 to get help with flooding on the street. He said the drainage system doesn’t work.

Sometimes flood waters get so high, they seep into his garage and his next door neighbor’s garage. As a temporary fix, Wachira and his neighbor Eldonna Rose, place tarps on their garage doors and place sandbags on top of them.

“Sometimes if you stand right here, you can see a wave of water coming down,” Kevin Wachira said as he stood in his driveway. “And it saturates here. The last time we had this, we had a few cars stuck here in the middle of the road. They had to some and get it the following day. It’s just been trying to get it fixed, it’s been difficult.”

Wachira said both he and Rose contacted Kansas City’s 311 center a total of four times, but said nothing has been done to fix the drainage issue that causes flooding. 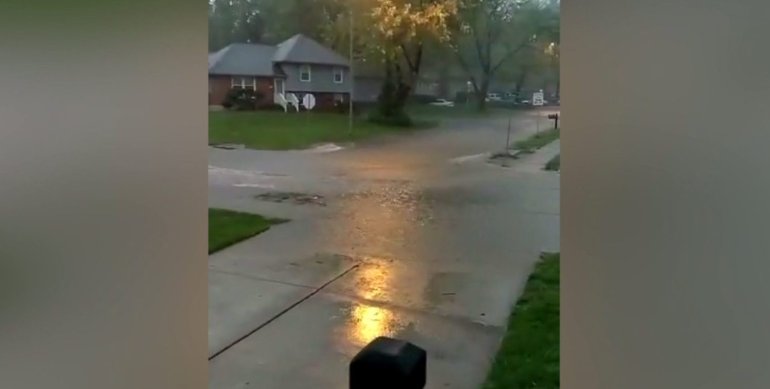 “This side of my house has sunk,” Rose said. “It has low foundation problems. The water messed up my driveway. If we don’t have things sandbags, we have 3-8 inches of water in my basement, and we have to throw everything out.”

Both neighbors said they’re not just worried about their own homes, but the general safety of the community.

“The manhole covers will fly 3-5 feet in the air,” Rose said.

Wachira said the intersection at N.W. 76th Terrace and N.W. Milrey Drive is a school bus stop, and he worries flash floods will happen during school hours.

Rose moved to the neighborhood in 1983 and said back then, the flooding didn’t happen nearly as often.

“Two years ago, we had almost three floods in one weekend,” Rose said. “The watershed here is overtaxed.”

Wachira called 311 Tuesday morning and said he was told to submit the problem online.

FOX4 checked with KC Water, and the department said it doesn’t have any projects for the area for the drains or creek behind the affected homes.

They told us the neighbors should contact the Public Improvements Advisory Committee. PIAC holds public hearings and seeks recommendations from the community for city and neighborhood projects.

The Milrey Drive neighbors plan to do that.

“We try to protect our house,” Wachira said. “She`s trying to protect her house. We’re trying to get help, and this is where we are at.”