White said she purchased the flag for Memorial Day weekend. On Thursday, she said she came home from work with a notice on her door from management that said if she didn’t remove the flag they will dispose of it. The notice said her lease indicates storage is not allowed on decks. 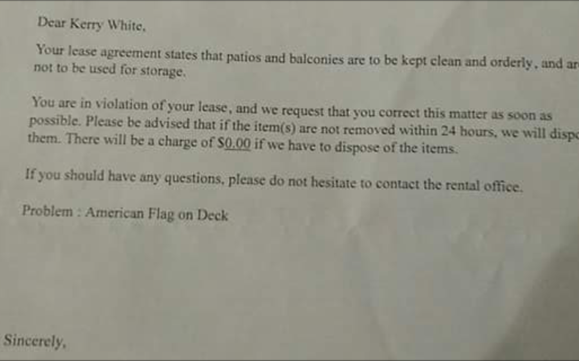 FOX 4 spent hours on Friday trying to get answers from the apartment complex management. When we called the first time, an employee said they could not comment. After FOX 4 called a second time asking for a manager staff gave us a number but the manager never called us back. Texts were also not returned. Then, staff said we had to call their New York office and that office never called FOX 4 back either.

White said the notice management left her makes her angry.

“That says the only problem on my balcony is my American flag, I don’t understand how an American flag is a problem,” she told FOX 4 on Friday.

White said she is considering getting an attorney to help her fight the complex. She said she temporarily removed the flag because the notice said staff would dispose of it if she didn’t.

On Monday the apartment complex provided this statement:

Cordillera Ranch Apartments shares Ms. White’s great pride and joins her in saluting our nation’s armed forces and the effort and sacrifices that they have made for our country. Please understand that management had no intention of removing and disposing the American flag.  We regret that our response did not adequately or appropriately address the issue.  We have spoken with Ms White  regarding how she can properly display her flag on her balcony in accordance with the terms of  her lease.  We regret the misunderstanding that occurred over this issue and trust that this statement will clarify Cordillera Ranch’s position.