ATCHISON COUNTY, Kan. -- The National Transportation Safety Board is providing the latest details about the deadly plane crash that happened Sunday morning in Atchison County.

The plane crashed shortly after takeoff Sunday morning, killing the pilot and a passenger.

FOX 4's Molly Balkenbush reports that the investigation is ongoing, and could take 10 months to a year before information is released to the public.

Right now the NTSB is mapping the scene and will remain there until Tuesday when the debris will be transported. Investigators will talk to neighbors, one already said that they saw the plane flying about 25 feet from power lines and dropping nose-first.

An investigator said that the operators weren't communicating with air traffic control, and weren't supposed to be, but there is no record of distress. 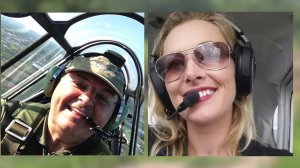 Vlado Lenoch and Bethany Root were killed in a plane crash Sunday morning.

The pilot, 64-year-old Vlado Lenoch, was advertised as one of the highlights of this weekend's Amelia Earhart Festival in Atchison. His passenger, 34-year-old Bethany Root, also had close ties to the Kansas aviation community.

FOX 4's Molly Balkenbush spoke to a woman who worked with Bethany Root at the Amelia Earhart airport, where Root was the general manager.

They said she died doing what she loved most. 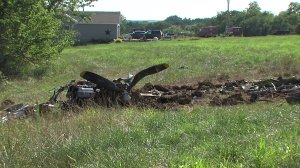 A P-51 Mustang called "Baby-Duck" crashed, killing the two people on board.

They said the plane was only in the air for 10 or 15 minutes before it crashed.

Neighbors called 911 after it slammed into a field.

Jacque Pregont is the coordinator of the Amelia Earhart Festival, and said she worked with Bethany.

"Very enthusiastic, very energetic. She loved to fly; she loved aviation; she wanted everybody else to love aviation," Pregont said. "Find something that you're really passionate about and do it, and that's what she was doing."

The pilot was in town to fly during Saturday's festival.

Many people were commenting on our FOX 4 Facebook page how heartbroken they were to hear this news and how they had just watched Lenoch's incredible performance at the festival.

The plane wa a P-51 Mustang named "Baby-Duck" that flew along the Missouri River in the air show at the Amelia Earhart Festival on Saturday.

"Baby-Duck" was a historic military aircraft built in 1944 and saw service during World War II.

KANSAS CITY, Mo. -- Kansas City protesters were given a lot more leeway Thursday night. It was the first time since protests started last Friday that there wasn't a heavy police presence at the Country Club Plaza. There were no police lines and no arrests by police in riot gear as protesters entered city streets that had been closed off in past nights. Instead, on Thursday, streets throughout the Plaza were…

BUFFALO, N.Y. (WIVB) - A man was taken away in an ambulance after being injured at the end of Thursday's protest in Niagara Square.

A video that News 4 obtained from WBFO shows a man, who appears to be elderly, appearing to be pushed back by police before falling backward and hitting his head on the steps of Buffalo City Hall.