INDEPENDENCE, Mo. — On March 4, 1978 the Bee Gees blasted on the U.S. airwaves with “Night Fever”, and Kate Bush’s “Wuthering Heights” took over the radio in the U.K. Americans watched shows like The Muppet Show, Three’s Company, The Love Boat, and Black Sheep Squadron.

President Jimmy Carter was in the Oval Office, the Iranian Revolution was in the early stages leading to the overthrow of the monarchy almost a year later, and China’s Vice Premier Deng Xiaoping would be named the Time Person of the Year. He overthrew Hua Guofeng and became “Supreme Leader” of China.

In Independence, Missouri on March 4, 1978 a brazen and mysterious theft took place at the Harry S. Truman Presidential Library & Museum. Around 6:30am, thieves took priceless swords and daggers from a prominent display case in the lobby. The theft from start to finish took about 45 seconds.

The weapons are still missing and part of an active FBI investigation. The items are inlaid with precious metals and jewels. The National Archives is also interested in finding the relics. President Truman received the items in a time when international relations were in a sensitive spot following World War II.

A glance into the 33rd president’s time in office

The 33rd democratic president of the United States served our country from April 12, 1945 to January 20, 1953. He succeeded upon the death of Franklin D. Roosevelt after serving as vice president.

Truman gave permission to drop the atomic bombs on Hiroshima and Nagasaki. He signed a proclamation to authorize U.S. entry into the Korean War. He helped abolish discrimination “on the basis of race, color, religion, or national origin” in the United States Armed Forces with Executive Order 9981.

During President Truman’s time, presidents were allowed to keep some gifts for themselves with approval from Congress. Rules changed in 1966.

It bothered the 33rd president that previous presidents left papers and gifts scattered about in the Oval Office and White House. The variety of gifts and chaos left the presidential space into a kind of luxury flea market. He setup arrangements while in the office to create a presidential library. He eventually donated back to the federal government his papers and gifts.

The donations gave the American public a better idea of the life and trappings of Truman’s presidency.

Setting up a presidential library has become a standard practice for all presidents following Mister Truman.

The stories behind the stolen weapons

During Truman’s presidency, the Shah of Iran, the Crown Prince of Saudi Arabia, and the Saudi Arabian King gave him gifts.

There isn’t a lot of background information on the sword and scabbard given to President Truman by the Shah of Iran, Mohammad Reza Pahlavi. The Shah came into power during World War II after an Anglo-Soviet invasion forced the abdication of his father. He wanted to turn Iran into a global power, modernizing the nation, and granting women suffrage. He was the last Shah — the monarchy dissolved in February 1979.

The gifts from Saudi Arabia to President Truman have a more clear story behind their purpose.

Crown Prince Amir Saud of Saudi Arabia made a trip to the United States in 1947. President Franklin Roosevelt had forged an alliance between the two countries based on shared oil interests. The relationship was still budding under Truman’s administration.

Amir Saud had a 15-minute meeting with Truman in the White House on January 14, 1947. He paid his respects by giving bejeweled swords with scabbards and a dagger to the president. The weapons were crafted in gold and steel and inlaid with diamonds and rubies. The prince met with world leaders that year to acquaint policymakers with his father’s views and to talk about the current climate with Palestine.

In exchange, Truman gave the Crowned Prince a signed portrait of himself. Three weeks later, after Amir Saud finished his tour of the U.S., the president lent him his private plane — nicknamed the Sacred Crow — for the prince’s return trip.

The next occasion for gifting between the two countries was part of a significant diplomatic effort.

In April 1950, Amir Saud’s father, King Ibn Saud became increasingly sick from osteoarthritis. It’s one of the most common forms of arthritis and joint diseases, resulting from joint cartilage and underlying bones breaking down over time.

The king failed to find relief from his doctors. He was 75 years old.

A confidential diplomatic note sent to the U.S. State Department asked for help in the health matter. The U.S. government agreed to give support. It put together a cadre of specialists to send on a secret trip to the Middle East. President Truman offered his personal physician to be part of the team, Brigadier General Wallace H. Graham.

The medical trip was a success. It cemented relations between the United States and the Saudi kingdom, which had been strained recently by the U.S. recognition of Israel.

King Ibn Saud thanked Truman for his help by giving him priceless ceremonial weaponry. The items were more valuable than the weapons the Crowned Prince gave to the president three years prior.

The King sent a sword with a curved blade made of steel. It has an ivory handle decked out in diamonds and rubies. He also sent a dagger with a gold hilt encrusted with emeralds, rubies, and diamonds. Both weapons came with a bejeweled scabbard.

The King died three years later from a heart attack in his sleep.

President Truman donated these weapons to the presidential library because he felt like they belonged to the public. He received several gifts while in the Oval Office, including a “lucky” Tiger’s bone from the Prime Minister of Nepal and a Torah from the President of Israel. He didn’t receive as many gifts as his predecessors, however. This likely was because several countries were recovering from the toll of World War II and gift-giving to other nations wasn’t a high priority.

The quick raid for expensive items

On March 24, 1978 thieves smashed and grabbed items while a security guard at the presidential library was on the other side of the building. He might have been distracted by the unusual behavior of a female accomplice — she had stepped out of a late-model Oldsmobile and was pacing around frantically in the parking lot.

In less than a minute, the thieves shattered the glass display case in the lobby and left the place with three ceremonial swords and two daggers.

The security guard, Thomas Williams, was on duty and was reportedly alert and patrolling the premises. The alarms sounded when the door was smashed open. The library hadn’t opened to the public yet.

The thieves took the most valuable items in the case. Authorities said they were well prepared. In 45 seconds, they entered the museum, padlocked the door to prevent the security guard from stopping them, and they took several items out of the place. They drove off leaving behind snowy footprints and broken glass.

The FBI hasn’t had any credible leads on the stolen property. The value of the weapons and jewels is estimated at $1 million.

It’s possible some of the Middle Eastern relics are still intact four decades later. The items could be in the possession of a person or party who thought they bought the artifacts legally through an auction or other marketplace. The items could also be hidden somewhere or forgotten entirely.

Descriptions of the swords and contacting investigators

The Harry S. Truman Library & Museum no longer displays priceless artifacts near the main entrance. The presidential library is currently undergoing a large renovation project and is set to open sometime next year.

If someone has property in question that looks similar to the weapons, they are encouraged to contact the FBI’s Kansas City office at 816-512-8200, or file a tip at the FBI website.

The FBI believes the thieves likely knew about the library’s security procedures back in 1978. A month prior to the break-in, a pair of men in their 20s — one carrying a walkie-talkie, the other a drill — left the venue after a guard approached them.

The museum opened on July 6, 1957. It cost $1,700,000 to build. For years, the library had swords in a display case on the wall in the lobby. The swords and daggers were to the left on a mural done by Thomas Hart Benton aptly called: “Independence and the Opening of the West.”

Here is a description of the items stolen along with pictures: 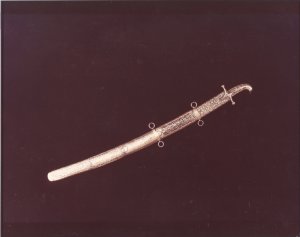 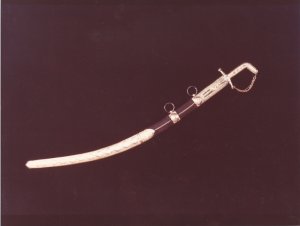 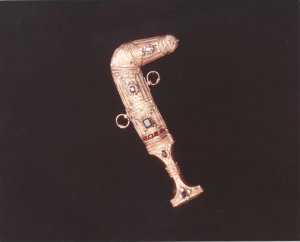 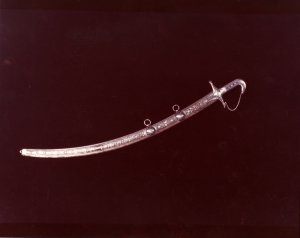 For more information on the swords and pictures, head to the National Archives website.

Items at museums and other large curated buildings often go missing. The National Archives assists in finding the lost or stolen pieces.

Other items missing or stolen from presidential libraries include: a portrait of FDR and a class ring given to Lyndon B. Johnson.

On another note, President Harry S. Truman was gifted with another weapon during his time in the Oval Office: a legendary Masamune sword.

It is housed in the Harry S. Truman Presidential Library & Museum. Gorō Masamune is widely considered Japan’s greatest swordsmith — some argue he was the greatest swordsmith of all time. He created a long list of weapons during his lifetime. Historians mostly agree he constructed the swords in the late 13th and early 14th centuries, 1288-1328 CE.

Masamune swords have a reputation of having excellent quality metal — this is remarkable considering he lived during a time when it was difficult to craft steel, and it was generally impure. He trained several swordsmiths in his lifetime; 15 are known. Masamune swords are considered national treasures in Japan.

A long list of current day stories often include tales about Masamunes, much like how King Arthur’s Excalibur appears in works of fiction.

The tang of the blade on the sword given to Mister Truman is gold. There are characters inlaid on the weapon to indicate it was authenticated by a representative of the Japanese emperor in the 16th century. The disks on the handle are bronze covered in gold; the black scabbard signifies formality.

President Truman received the sword on March 4, 1946 in the Oval Office by General Walter Krueger. He was commander of the 6th Army Occupation forces in Japan following WWII. A Samurai family in Japan gave the sword to the general. Only ten or so are known to exist in the modern world.