OKLAHOMA CITY – A bet made during a night of drinking left one Oklahoma man down 140 pounds and up $2,000, according to KFOR.

Tyler Segraves said it all started one night in September 2017.

“My buddy and I are sitting out, hanging out drinking, having a good time, and he always gives me a hard time about my weight, and we jab back and forth at each other and he said, ‘I bet you can’t lose 100 pounds in a year,'” Segraves said.

The two signed an agreement but, one month later, Segraves hadn’t even started dieting.

A work trip changed all that.

Segraves cut out soda, carbs and alcohol – creating a modified Keto diet after plenty of research. He stuck to healthy snacks instead of fasting to keep his metabolism up.

“I could have been sponsored by Hardtimes beef jerky with how much I ate,” he said.

It worked – quickly. Segraves lost 30 pounds in the first month.

The avid Oklahoma State University sports fan said he wasn’t even tempted at tailgates. He said the results were enough to keep his cravings at bay most of the time.

“Once I saw the weight come off, that’s what I craved. I was like ‘I want to weigh in again and see,’” he said.

Now, Segraves finds joy in the little things when it comes to eating.

“Coffee’s like my cheat thing now because I’ll put a little bit of creamer in it,” he said. “Yeah, that’s my 30 calories per day when I put my one little pump in.”

One month before the bet’s deadline, Segraves had lost more than 100 pounds. He offered his friend an $800 buyout. 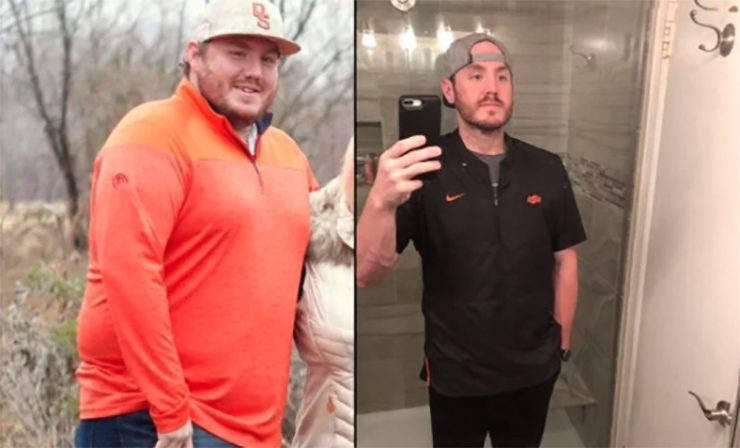 “He goes, ‘Nope, we’re waiting until September because you might gain it back.’ And, so, he’d always message me and be like ‘Let’s go to Twin Peaks or let’s go over here.’ He was trying to like tempt me into it.” he said.

Segraves ended up losing more than 140 pounds – dropping from 335 to about 195 pounds. His parents didn’t even recognize him.

His success got the attention of Men’s Health Magazine – and he was featured in an article on their website. Segraves also has a growing following on social media made up of people who regularly ask for tips and advice.

“It’s been really cool,” he said. “I think it’s helped some people, so that’s kind of the point of the whole thing.”

Seagraves’ next goal is to build more muscle. He’s lifting weights and swimming, since he said he’s sick of traditional cardio.

And what did Seagraves do with his winnings? He said he paid off a credit card.