KANSAS CITY, Mo. — There are an average of 400 to 600 cardiac arrests every year in Johnson County.

For people treated immediately by an AED, it increases the chance of survival by 50%.

Olathe West student Brennan Connell is one of the lucky ones. He’s alive at Children’s Mercy Hospital, saved by the device medical experts call a game changer.

“I am not gonna die today.”

It’s a quote from Connell posted on his dad’s Facebook page. The Olathe West baseball pitcher said it from his hospital bed after suffering cardiac arrest Monday on the mound during a game at Blue Valley Southwest.

Connell was brought back to life by an AED — and people willing to use it.

“I am just thankful the kid is OK,” Dr. Kortnee Sorbin said.

Sorbin is a doctor who just happened to be at the game to watch her step-son play on senior night. It was the first game Sorbin had attended all year. When she saw Connell collapse, she went from mom mode into doctor mode and ran out to the field.

“You kind of just turn the switch and forget everyone else is there,” Sorbin said. “You don’t really think. You just act.”

Sorbin joined an athletic trainer and nurse who were assessing the situation.

“He was breathing. We weren’t sure if he had a seizure or what was going on,” Sorbin said. “They turned him on his side, and he did start to progress into the more ominous breathing. So we put the AED on him, and those are important things. That AED saved his life.”

You don’t have to be a doctor to use an AED. Dr. Ryan Jacobsen, medical director for Johnson County EMS, said they’re made for the lay person to use and walk the user through step by step.

Once the device is turned on and talking, it will direct the user to put two adhesive pads on the patient. Once the pads are on, the AED takes the heart’s rhythm and advises whether or not to hit the shock button.

In Connell’s case, Jacobsen said his heart was in ventricular fibrillation.

“So basically they have no blood pressure. You are not having blood flow to your brain. Your vital organs are for all practical purposes dead,” Jacobsen said.

In a matter of minutes, the AED and the people using it took Connell from death to being wheeled off of the field with a big smile on his face. 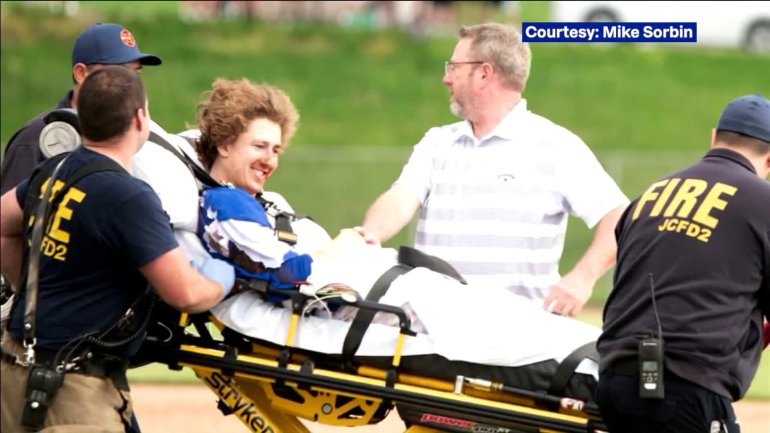 Only one out of 10 kids are revived from sudden cardiac arrest.

Connell had the right people at the right time and someone above looking over him, said Eric Schroeder with Athletic Testing Solutions.

“A lot of times these are unknown. They are very hidden heat conditions,” Schroeder said. “40,000 kids are born every year with a heart defect. That is one in 100 births, and so you never know who is drawing the straw and ends up with a heart condition. They can slip through physicals and never know anything about it, down to even a murmur that can be a valve problem or something like that.”

For the cost of a pair of shoes you can get your child an EKG, echocardiogram and other tests that are read by a pediatric cardiologist. The testing takes about 20 minutes and is painless, no needles and no blood.

Many metro school districts and sports clubs suggest parents get these types of heart scans. They’re the best way to prevent a tragedy on the playing field.

Sorbin visited Connell and said he’s alert, talking and in good spirits. Connell’s dad tells FOX4 that it’s still touch and go. Doctors are trying to figure out what caused his cardiac arrest.

Why Trump’s effort to oust Murkowski could hit hurdles

Why Trump’s effort to oust Murkowski could hit hurdles

Bags lost or damaged while flying? Here’s what to …

Man killed himself after ramming US Capitol barrier