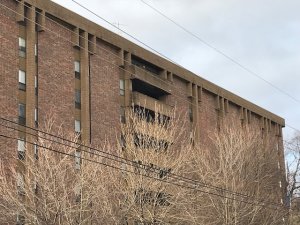 The Overland Park Fire Department said the fire, which has now been extinguished, occurred just after 2:30 p.m. Monday at Overland Towers Apartments in the 8500 block of Farley Street.

Jason Rhodes with Overland Park Fire said when fire crews arrived, they found an active fire on the second floor of the building. Firefighters found 54-year-old Bettina G. Yonally dead in a unit on that floor. Fire officials initially said the victim was a man, but later corrected that statement, saying the victim was a woman.

Two other people were taken to the hospital due to smoke inhalation, Rhodes said.

Majority of residents who were evacuated are being kept on the first floor while firefighters investigate damage and make sure the building is safe. Most residents should be able to re-enter their homes, Rhodes said.

The cause of the fire is unknown at this time and under investigation.

Farley Street is currently closed between 85th and 86th streets, and a portion of 86th Street near the apartment building is also closed. However, Rhodes said road closures around the building shouldn't affect traffic on 87th Street.

The Lenexa Fire Department and the Johnson County MED-ACT assisted with extinguishing the fire.

Those concerned about their loved ones can call the apartment complex at 913-341-3113.

NASHVILLE, Tenn. (WKRN) — A man beat his teenage stepbrother to death at a Tennessee home, while the boy’s mother watched and did nothing to stop it, an arrest warrant alleges.

KANSAS CITY, Kan. -- A kidnapped child was found early Sunday morning in Kansas City, Kan., but police are still searching for the suspect.

KCKPD says just after 5 a.m., officers received a missing child call where a family member said a man named Germaine Lewis forced that child into a vehicle in the 2300 block of W. 39th Street, very close to the state line.

GARDEN CITY, Mo. -- Missouri Highway Patrol troopers are investigating after they say they were forced to shoot and kill a man who charged them with a knife on Saturday night.

The highway patrol says they were called around 10:30 Saturday night to help the Cass County Sheriff's Office with a disturbance near Main and 3rd Street in Garden City. When troopers arrived, they say they encountered that man who ignored repeated commands to drop the knife.