KANSAS CITY, Mo. — Organizers of Kansas City Fringe Festival are looking for a man caught on camera stealing a piece of artwork.

The theft happened Sunday evening after volunteers of the arts-based festival went home for the day.

“We staff during the daytime, usually during noon until 8,” said Cherly Kimmi, the executive director of the festival. “We’ve been doing this for 15 years and never anticipated that someone would take a picture off the wall.” 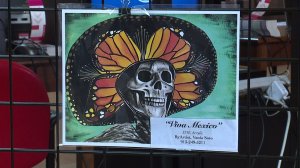 A still image from surveillance cameras shows a man walking out toward the exit of Union Station with an original framed painting by local artist Vania Soto. It’s valued at $350.

“After taking some time to reflect, I have to say this has to be one of the best compliments,” Soto wrote on Facebook. “To have someone willing jail time, exposure on social media and shame from the ones who know him on such an act.”

A print of the original shows a skeleton wearing a sombrero. Soto painted it for Day of the Dead, a Mexican holiday.

“This piece meant so much to me,” she wrote. “Thank you, sir, you have empowered me to know my artwork is priceless.”

Organizers of KC Fringe are hoping someone recognizes the man, so they can return the piece to the artist. 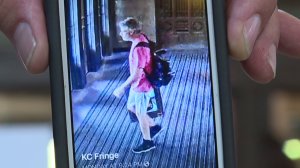 “Everyone has different taste, and someone obviously took a fancy to this and decided they wanted it for themselves,” Kimmi said. “Unfortunately for the artist. This is how these artists make their living. They sell their work to make their living.”

Kimmi said the thief took advantage of their shift change, which is why they will have staff on site each day, until Union Station closes at midnight, through the end of the festival on Sunday.

They also put up signs warning people that the artwork is under surveillance.