OVERLAND PARK, Kan. -- A family fled to the roof of their home at 155th and Kenneth in Overland Park Tuesday morning, as the Blue River rose and the water surrounded them. They were eventually rescued around 12:18 p.m., when a family with a military style APV was able to evacuate them safely.

Jason Rhodes, Overland Park Fire Dept., spokesperson said the family of seven was trapped on the roof for at least four hours. There were four children, three adults and their pets.

"They are safe and calm," Rhodes said. "Because they are not in imminent danger and the water levels around them are receding, crews will allow those water levels to drop to safer levels before evacuating the family."

The Overland Park Fire Department had swift water rescue teams on hand who are specially trained to go into rushing water.

But because there was no imminent danger and the floodwaters were receding, the fire department says it didn't make sense to launch what could be a risky rescue operation.

Anyone else in the area either self evacuated or got away safely.

The area near 151st Street and Kenneth Road is a known high water trouble spot. Those with property nearby say they just finished cleaning up from flooding a month ago. Some say this is the most water they've ever seen rush through the area. 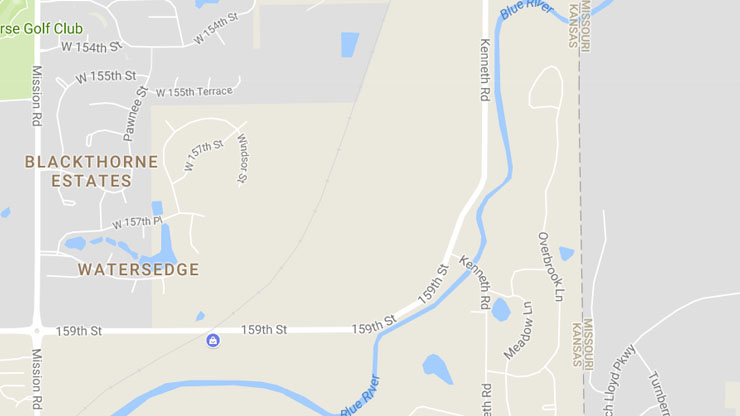 The Blue River is a fifth order stream which flows 41 miles in a northeasterly direction through the Kansas City metropolitan area and enters the Missouri River at river mile 357. Brush, Indian, Tomahawk, Wolf, and Coffee creeks are major fourth order streams in the basin. Average stream gradients range from 4 feet/mile for the Blue River to 68 feet/mile for Round Grove Creek. Average annual precipitation in the basin is 36 inches while average annual runoff is about seven inches. Average annual discharge of the Blue River at stream mile 22 is 157 cfs. Blue River flows tend to be flashy and the stream frequently floods. (Editor's note: A previous version of this story incorrectly stated which direction the Blue River flows, it has been updated for accuracy.)

"Emergency responders are closely monitoring the Blue River which is estimated to crest in areas around noon today, specifically the area near 85th & Hickman Rd," said Stacey Graves, Kansas City, Mo. police spokesperson. "Any bridges that experienced water overages and/or water approaching underneath will remain closed until they have been inspected.

The Kansas City, Mo., Fire Dept. and Kansas City, Mo. Police Dept. responded to more than 130 weather-related calls overnight and into Tuesday morning and were still actively responding to scenes later into the morning.

COLUMBIA, Mo. — Missouri Gov. Mike Parson on Thursday signed a bill into law that will allow people to vote by mail this year if they're concerned about the coronavirus. Voters currently can request absentee ballots only if they provide an excuse for why they can’t vote in person. Illness is one option, but the law isn’t explicit on whether the illness excuse covers healthy voters concerned about catching or…

The Rev. Al Sharpton announced Thursday that he's organizing a March on Washington in late August to mark the 57th anniversary of the historic demonstration for civil rights as protests over the death of George Floyd sweep the nation. Sharpton said the event will be led by the families of black people who have died at the hands of police officers, including Floyd's family. Sharpton made the announcement while speaking at Floyd's memorial service on…