OVERLAND PARK, Kan. — An Overland Park mom says she found metal flakes in a bottle of gummy vitamins for her toddler.

Samantha Andersen’s post about the discovery was shared tens of thousands of times on social media this week.

The mother of three said her family has used Zarbee’s Naturals multivitamins for years. But when some of the gummies were clumped together and she dumped them on a plate to separate them, she said she noticed something peculiar — what looked like metal shavings.

“My husband said, ‘Take a magnet and see if it sticks,’ and sure enough the magnet picked them right up,” Andersen said.

Andersen showed FOX4 a plate with three tiny pieces of what appeared to be metal Friday and a handful of gummies poured from the bottle.

“These two gummies, you can see a flake here inside of the gummy,” she pointed out. 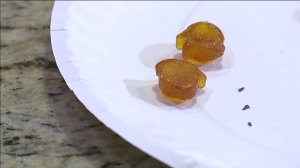 Most troubling for the mom, they were the last few gummies in the bottle that she’d been giving her 3-year-old daughter for two months.

“I fed these to her. I feel like I have failed. I feel terrible that this metal is in her stomach,” Andersen said.

Little Milani Andersen’s pediatrician recommended the family go to the ER to get an x-ray. Although the report said the technician didn’t find “large amounts of metal” in her body, the family said they were told the x-ray showed metal in her intestines.

Andersen said she’s since researched how metal could end up in food products but isn’t satisfied as to why.

“Food is mass produced these days, and metal machines will break apart. And I guess pieces will fall into the production line, but there’s supposed to be tools or people in place to catch those things.”

“The FDA is aware and currently investigating the complaint,” an FDA spokesperson said in a statement Friday.

Zarbee’s Naturals didn’t immediately respond to FOX4’s calls for comment. Andersen said when she reached the company, a representative asked her to send in the bottle and its contents and offered her coupons for future purchases.