Salute to Blue brought out hundreds of people across Overland Park, while trying to practice social distancing. Dressed in blue, they lined streets holding encouraging signs, American flags and flags with a thin blue line. 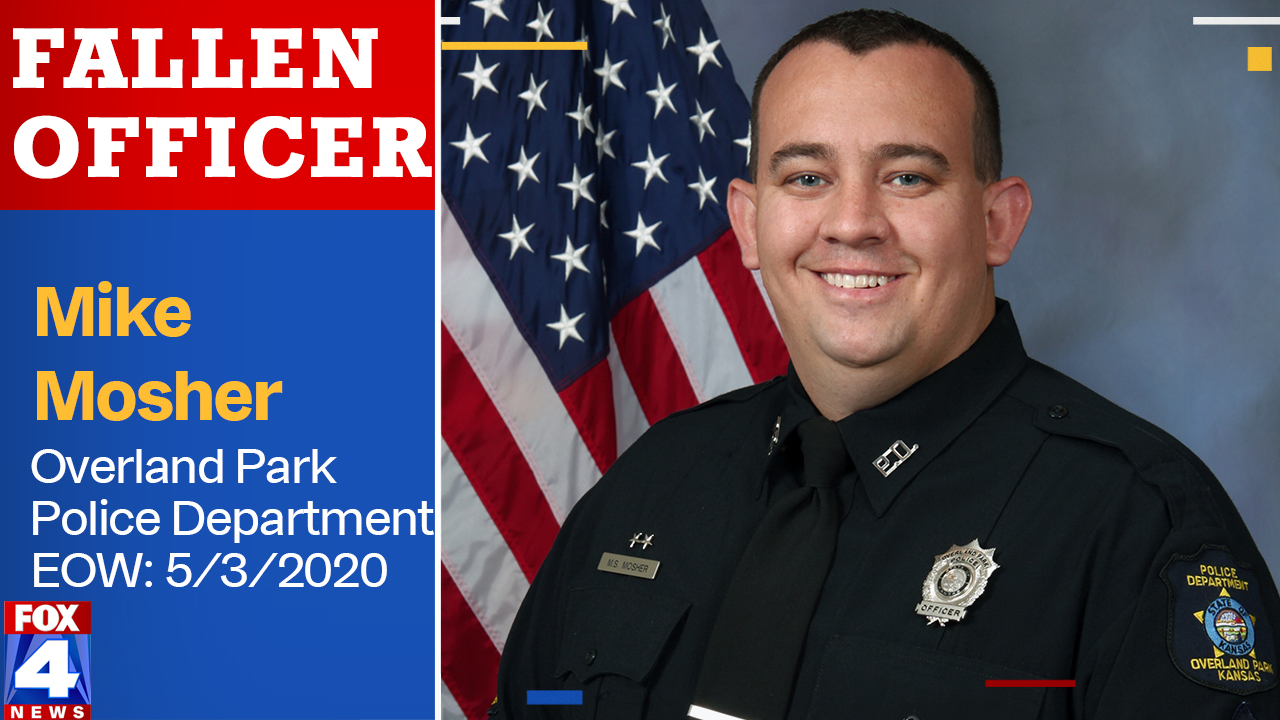 One man who lives along the route put a flag outside his house out of respect for Mosher and has a heartfelt message for his family. Some porches were lit up in blue.

“My heart goes out for ‘em and just ask the Lord to bless them and keep, comfort them,” Lee Acciacca said. “The husband gave, the officer gave the ultimate sacrifice and it’s appreciated and it isn’t forgotten.”

Other homeowners along the route traded in white porch light for blue bulbs paying tribute to Officer Mosher and his family.

“I spent four years in the Navy, but was never in harms way, these guys are in harms way daily,” Acciacca said. “It’s just my way of trying to show him respect and appreciation for all the officers, fire and first responders.”

City Hall and the police station off Santa Fe Drive and Antioch also lit their buildings in blue lights.

People with the city put up hundreds of flags along Metcalf from 75th Street to 125th Terrace.

The vigil started at 95th and Switzer near Oak Park Mall. Police said that’s where Mosher would often work off-duty.

The tribute also traveled down 123rd St., where Mosher lost his life in the line of duty.

“I’ve had to put my life on the line and my gratitude and thanks goes out to them,” Acciacca said.

This vigil coincides with National Police week. Overland Park is honoring all other brothers and sisters who lost their lives in the line of duty.

The driving vigil is the first of three ceremonies planned to honor Mosher.

There will be a drive by visitation Tuesday, May 12 from 4 p.m. to 6 pm. It’s open to the public and located under the canopy of the 110th St. entrance to the Overland Park Convention Center.

A private funeral service, for family and friends only, will be Wednesday, May 13 at 10a.m.

Following the funeral, the public is invited to view the procession escort, including a horse-drawn carriage, along College and Metcalf.

If you would like to write a message for Mosher’a family or the Overland Park Police Dept. visit the Johnson County Funeral Chapel and Memorial Gardens website.

RAYTOWN, Mo. – Raytown police continue to investigate after two people were found dead inside a home on Jan. 13. The couple was identified as 69-year-old Kenneth McKenzie and his wife, 62-year-old Etta McKenzie.

People throughout the community are mourning the loss of the well-known couple. Etta was a long time insurance agent with State Farm who also owned a handful of other businesses.

According to police, a caller reported a car crash near 29th and Indiana, saying the drive had crashed into a home in the area.

GLADSTONE, Mo. -- Police say suspects in the same stolen car could be responsible for several carjackings all around town the past month.

On Dec. 29, the driver of a dark gray/black Dodge Challenger was carjacked near Oak Park Mall. Since then, police in multiple metro communities have investigated carjackings or attempted carjackings involving similar descriptions of the same suspect vehicle.

See the auroras from space in newly released photos

Here’s what has to happen for $1,400 stimulus checks to become reality