Gary McKenzie and Anthony Stratton, who operate the online fan forum Arrowhead Guys, wanted to get to the bottom of negative energy that’s surrounded the stadium, in particular, during the NFL Playoffs.

Since 1972, Arrowhead has been home to heroes and heartache, especially in the postseason.

A new online video, produced by Arrowhead Guys, shows what happened last Friday when they took the stadium tour along with psychic medium Vicky Millard, who also works as a paranormal investigator in Topeka.

Stratton, a lifelong Chiefs zealot, is a skeptic by nature, but he said he was stunned by what he saw during the tour.

The video clip shows Stratton and McKenzie walking the entire stadium with the tour group, as Millard, who joined them, said she detected paranormal sources of negativity.

Millard, who operates Kansas Paranormal Investigations, said she came into contact with the presence of a man dressed in a suit from the early 1970’s. Millard said she later realized it was the spirit of Super Bowl IV-winning coach Hank Stram, who was fired in 1974.

Stram died in 2005 at age 82, and many Chiefs fans objected to his firing. Stram, the team’s original head coach, is said to have held a grudge against the franchise and founder Lamar Hunt over his termination.

“(Stram) is ready to let it go. He’s ready for the Chiefs to have another win,” Millard said. “He’s a Chiefs fan through and through. Where would you spend your time when you’re on the other side if you can have the best seat in the house.”

Stratton said during another portion of the tour, Millard got a pain in her right leg as the group approached section 111 in the stands. Stratton said the psychic medium has no idea that Stratton and his late father, Richard Stratton, had attended a game before his passing on Nov. 1, sitting in that same section. Richard Stratton was an amputee, who had lost his right leg. 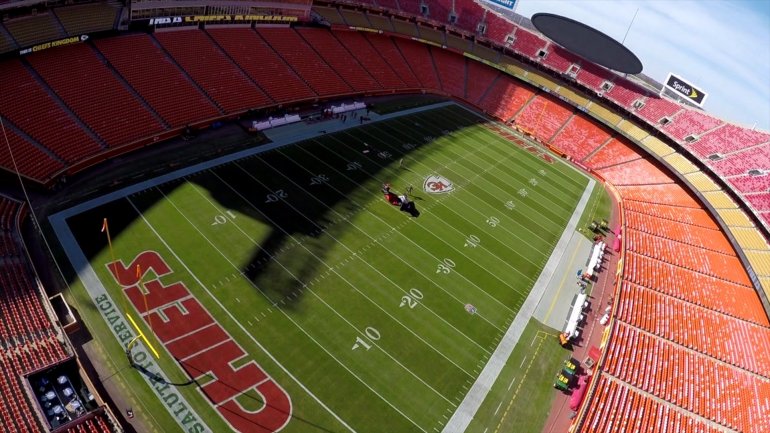 Those seats are located in the same general area where a man was killed during a 1972 crane collapse during stadium construction.

The Arrowhead Guys’ video shows Millard blessing the field, in effort to chase away bad energy.

Millard’s answer, when asked if the Sea of Red is cursed: “Not anymore. I don’t know that it ever was, but it certainly isn’t now.”

Based on her Arrowhead experience, Millard has one piece of advice for Chiefs fans: express some gratitude toward Stram. She got the impression the coach’s spirit would enjoy that, and besides, a little positive push can’t hurt,since the NFL playoffs are about to begin in Kansas City.

“(Stram) would like to see the Chiefs have another chance,” Millard added. “I think he’s to the point where he might be ready to help from the other side, sort of like a ‘Hank in heaven.’ I don’t want people to worry that he’s unsettled, or not in a good place, because he is. That’s why he’s able to communicate.”

You can see the Arrowhead Guys video clip here.