KANSAS CITY, Mo. — The parents of Toni Anderson are heartbroken and desperate for any information that could lead to their missing daughter. They are putting their hope in any news they get.

The Andersons describe their daughter as amazing, independent, and someone who loves kids. They say the UMKC student is a music blogger and often travels for work, but they her parents say she is always careful. They’ve been able to stay strong, thanks to the support of so many others.

“A lot of faith, a lot of friends, all of Toni`s friends have been amazing. The authorities have been unbelievable to work with,” said Brian Anderson.

The 20-year-old hasn’t been seen since early Sunday morning, after she told co-workers she was headed to a gas station at 31st and Southwest Boulevard, but she never made it there. 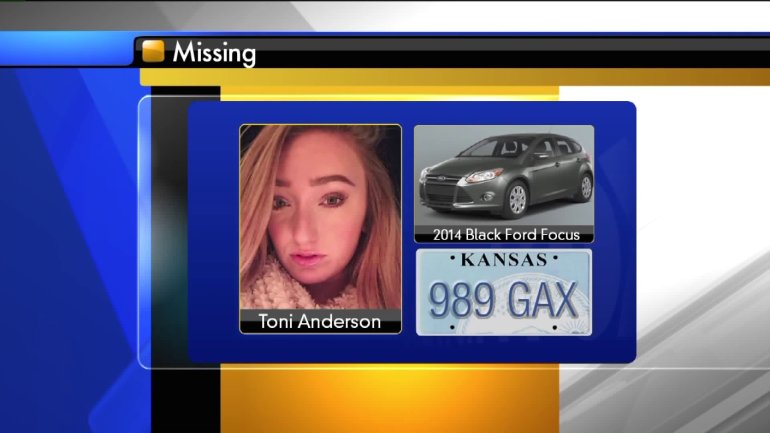 Her boyfriend says she works as a server at the Chrome entertainment bar on 40 Highway. On Sunday, she left work at 4:11 a.m., and was adamant about going to a gas station. However, 30 minutes later, Toni’s friend, Roxanne Townsend says she received a text from Toni.

“It was exactly 4:42 when she texted me and said, ‘I just got pulled over again.’ She said ‘again’ because she gets pulled over all the time,” Roxy Townsend said.

The Andersons say her friends continue to come up with ideas for searches, including getting a volunteer canine unit.

“Let her go. Let her be with us. Let her go have her wonderful life,” she continued.

An update from police Tuesday night said it has been determined that the North Kansas City Police Department did stop the missing woman prior to her disappearance. Police say they are still working to determine her next steps after the traffic stop concluded.

A GoFundMe account has been set up to pay for a private investigator to help find Toni. If you have any information, call the TIPS Hotline at (816) 474-TIPS.

US vows to pay relatives of Afghans killed in drone strike

WASHINGTON — The U.S. Defense Department said Friday that it is committed to offering condolence payments to relatives of the 10 people who were killed in an errant U.S. drone strike in Kabul, Afghanistan, in August.

Pentagon spokesman John Kirby said in a statement that the Defense Department was also working with the State Department to help surviving family members relocate to the United States.

Lucy in the sky: Spacecraft will visit record 8 asteroids

CAPE CANAVERAL, Fla. — Attention asteroid aficionados: NASA is set to launch a series of spacecraft to visit and even bash some of the solar system’s most enticing space rocks.

The robotic trailblazer named Lucy is up first, blasting off this weekend on a 12-year cruise to swarms of asteroids out near Jupiter — unexplored time capsules from the dawn of the solar system. And yes, there will be diamonds in the sky with Lucy, on one of its science instruments, as well as lyrics from other Beatles’ songs.

LEAVENWORTH, Kan. -- A 37-year-old Topeka man was sentenced Friday to over 2 years in prison for ramming an off-duty police officer with his car in 2019.

Get an exclusive look inside Mizzou’s new medical research building

5 things to do this weekend in the Kansas City area

US vows to pay relatives of Afghans killed in drone strike

Lucy in the sky: Spacecraft will visit record 8 asteroids

Get an exclusive look inside Mizzou’s new medical research building