KANSAS CITY, Mo. — Part of Kansas City’s Jazz District is closed down after a section of historic building’s wall fell in Thursday.

Now, engineers are deciding whether the remodel of that building at 19th and Vine should continue.

The building owner, Lisa Walker-Yager, said the remodel is going according to plan.The building is privately owned and was in process of undergoing a face-lift to eventually reopen in the near future. 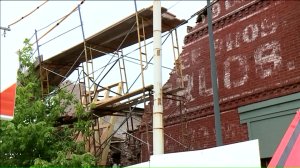 Workers were attempting to take down the wall as part of a rehabilitation project at the Mardi Gras building when it partially collapsed. No debris fell into the street however the scaffolding did get pushed back a bit and into a telephone lines.

“We braced it to accommodate for most safety issues that needed to be accommodated for,” engineer Clark Kelly said. “As they were starting to take the brick from the top down, it started to move. The bulge went first and some of the upper interior went with it as well.”

No buildings were evacuated, but a section of 19th and Vine will be closed while the building is inspected and some of the debris is cleared.

Walker-Yager said the rehab project will continue, but city officials said they are awaiting a report from their engineer to determine if the building can be saved or should be demolished.

RIVERSIDE, Calif. -- The thief dubbed the "snake burglar" because of the way he wriggled on the floor to avoid businesses' alarm systems in California seems to have reappeared.

The burglar, who made off with thousands of dollars worth of cash and merchandise from multiple businesses in December, might have struck again, this time at a gold exchange business earlier this month.

BEIJING (AP) — Repeated COVID-19 testing of millions of Beijing residents is starting to test the patience of some as the city clamps down on the virus ahead of the coming Winter Olympics.

The third round of mass testing that started Wednesday for the 2 million residents of Fengtai district drew complaints online and from residents bundled up against the wind to wait in line outdoors. The skies were sunny, but the daytime high hovered around the freezing point.

TOPEKA, Kan. -- Governor Laura Kelly has petitioned President Joe Biden for federal assistance on Tuesday to help with ongoing recovery efforts in the aftermath of the storms and wildfires which occurred on Dec. 15, 2021.

According to a recent press release from the Adjutant General's Department, the request to Biden came through the Federal Management Agency which asked the president to make a major declaration for the Public Assistance Program due to the damage caused by the extreme winds and fires that spread on Dec. 15. Kelly visited with residents in western Kansas on Dec. 29, 2021 to survey the extent of the damage personally and meet with farmers and ranchers who were hit hard by the wildfires, saying that "it's critical that we mobilize all of the available resources to aid their recovery."