*Update: Shortly after this story aired, animal control picked up the dog. He was taken to KC Pet Project where he will stay until they decided whether he can returned to his owner.

KANSAS CITY, Mo. — For the last 30 years, Stephanie Singleton has enjoyed living near East 72nd Street and Bales Avenue in Kansas City without any major worries — until now.

“I’m just afraid that he’s going to bite me, my grandchildren or some of the children in our neighborhood,” Singleton said Wednesday.

She said for nearly a month, a white, male pit bull has been roaming around her neighborhood, and the 71-year-old grandma can’t rest.

“He had me trapped in my car one day last month. I couldn’t get out of my car. He was running around the car, barking and barking at me. I have called the city’s 311 Action Line, and I’ve called Kansas City Animal Control. It’s so frustrating because that dog is aggressive and really vicious,” she said.

Singleton said the dog has been a menace to her, her neighbors, even their mail carriers have had frightening encounters with the canine that keeps coming back. 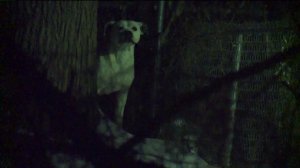 “One lady across the street said he also trapped her in her car one day and wouldn’t let her out. He also lunged at another neighbor and his grandchild. Our mailman has also been out there swinging his mailbag at the dog because it tried to bite him,” Singleton said.

On Wednesday afternoon, animal control officers returned to the neighborhood an 11th time — but they still couldn’t corral the dog.

Armed with his trusty pole, Tanner wasn’t discouraged. Instead, he trekked once again through the slushy snow and put down a cage, hoping to finally catch the elusive pit bull.

By late Wednesday afternoon, Tanner saw something hairy in the cage.

Once Tanner lifted the door, the cold cat quickly dashed out of the cage and ran off.

However, late Wednesday night the dedicated animal control officers were back in the Kansas City neighborhood for a 12th time, and low and below they spotted the dog behind Singleton’s backyard.

FOX4’s Robert Townsend also saw the dog and shouted to the officers that the dog was circling against a fence near Singleton’s backyard.

“We put more bait food in the cage, so we are hoping he goes in the cage, sits on the rear pad and then door will automatically closed. If that happens, then we will finally have him and can take him to our shelter to check him out and see if he belongs to anyone or if he’s a stray,” a Kansas City Animal Control officer said.

“I just want them to catch him and taken him away because I think he’s dangerous,” Singleton said.