KANSAS CITY, Mo. – There’s a new billboard in south Kansas City that will likely catch your eyes this month, but some people call it opportunistic.

This week, People for the Ethical Treatment of Animals (PETA) put up a billboard along Highway 71 and 63rd Street. It shows a cow in deep water with the words "Stop Eating Meat! They Die for Your Cruel and Dirty Habit."

“We need to start thinking about these animals, what their daily lives are like, and we need to stop contributing to this needless suffering,” PETA spokesperson Amber Canavan said.

The billboard is meant to pay homage to farm animals that were killed during the historic flooding across the Midwest in March. 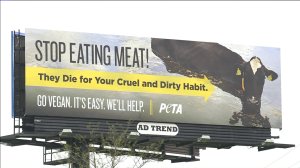 “These animals were likely terrified as they were being swept away in the floodwaters, but they faced an equally terrifying trip to the slaughterhouse,” Canavan said.

She added that the billboard’s purpose was also to encourage consumers to go vegan, a practice that eliminates meat, dairy products and all other foods that come from animals from a person’s diet.

“We do hope that anyone in the beef and dairy industry is looking toward the future,” Canavan said. “We need to be switching to plant-based agriculture.”

The Missouri Cattlemen’s Association called the billboard heartless and distasteful.

In a statement to FOX4, Mike Deering, the organizations executive vice president wrote the following:

“The truth is farm and ranch families are at the mercy of the weather. The sad fact is natural disasters are often devastating.

"Farm and ranch families were seen working frantically in Nebraska, Missouri and other states to move their livestock to higher ground before and during the extreme flooding. Facebook photos of baby calves living in ranchers’ basements were commonplace. The Nebraska National Guard air dropped bales of hay to stranded livestock.

"Farm and ranch families love their animals. It’s their life. When disaster strikes, they put it all on the line to save their livestock.

"Neighbors help neighbors. We stand tall and have zero tolerance for the hate and ignorance of PETA.”

On Wednesday, FOX4 talked with several people who saw the billboard and thought PETA may have been capitalizing on a natural disaster to push a “political agenda.”

“If it was them showing a slaughterhouse or something like that, I could see the point. But [the flood] was something natural that doesn’t have anything really to do with us going out and killing animals for food,” said Natosha McKatherine, who said she eats meat.

“It’s out of context,” said Emily Reinhardt, who said she rarely eats meat. “A flood happened and [it had nothing to do with] eating meat or the farmers treating cattle [poorly].

“I think what they’re aiming to do is a good thing, but I think the way they’re trying to portray it that if you eat meat you’re a horrible person [is not right],” Bret Kirkman added.

While Reinhardt and Kirkman called the billboard “awful and “divisive" they agreed PETA has the right spread its message, even if it doesn’t change their minds to stop eating meat.

“I think people will kind of reject what PETA is saying based on how they did it,” Kirkman said. “It just seems like a controversial way of going about it.”

“Not everyone’s mind is going to be changed, but their message is important and that’s their way of showing it,” Reinhardt added.

PETA plans to put another billboard up along Interstate 70 near Truman Road by the end of the week. The ads will be up for about a month, according to Canavan.

The organization will also add a billboard in St. Louis next week.

"Sonic the Hedgehog" eluded mixed reviews, production delays and a set of bad teeth to race to the top of the box office this weekend.

The Paramount film about the iconic Sega video character brought in an estimated $57 million domestically for its opening weekend. That number blew past expectations of the film making closer to $40 million.

A private funeral was planned Sunday afternoon near Los Angeles for Christina Mauser, who was killed with NBA legend Kobe Bryant and seven others in a helicopter crash January 26.

The service was set to start at 1 p.m. inside the gymnasium of her alma mater, Edison High School in Huntington Beach, CNN affiliate KABC reported.

DAYTONA BEACH, Fla. — The Daytona 500 has been postponed by rain for the first time since 2012, dampening NASCAR's season opener that started with a ballyhooed visit from President Donald Trump.

The race was postponed after two lengthy delays totaling more than three hours. The race will now begin at 3 p.m. CT Monday and be broadcast live on FOX4.