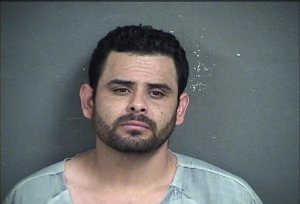 KANSAS CITY, Kan. — A Phoenix man has been sentenced after officials say he moved to Kansas City, Kansas to run a drug house.

In his plea, Badilla admitted that when investigators served a search warrant at the home in KCK, they found more than six pounds of heroin and two guns, including a .45 caliber pistol and a Panther Arms model AR-15 rifle.

Investigators said Badilla moved to KCK form Phoenix in August 2017 and rented the house for the purpose of storing and distributing drugs. He was paid $2,000 to $2,500 every other week to keep the drugs at his home. He said the drugs he stored were shipped form Mexico to Kansas City.

FLINT, Mich. -- A Michigan sheriff joined protesters in Flint Township on Saturday, putting down his weapon and saying, "I want to make this a parade, not a protest." Genesee County Sheriff Chris Swanson spoke with demonstrators who were met by police officers in riot gear, local affiliate WEYI reported. "The only reason we're here is to make sure that you got a voice -- that's it," Swanson said in video clips…