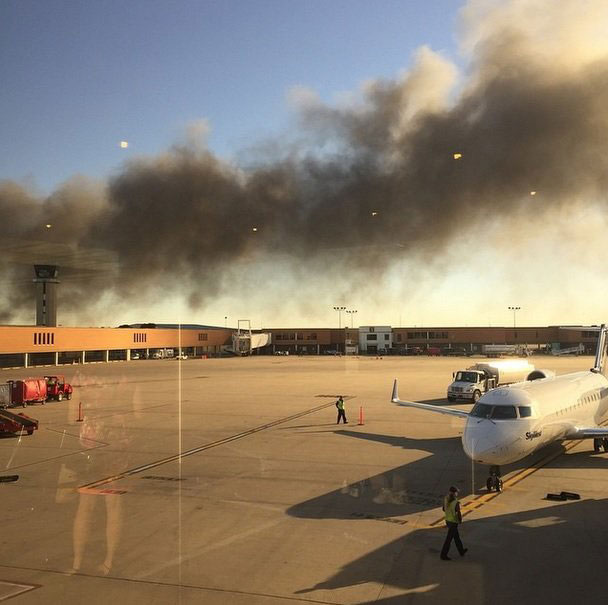 While five people were initially transported to the hospital, three of those patients were reportedly treated and released.

"Firefighters engaged in a horrific fight for several minutes. We have the fire under control. We are in the process of trying to determine if all the employees and visitors who may have been in the building are accounted for," Fire Chief Ron Blackwell told CNN affiliate KSNW.

About 50 to 60 firefighters responded and were evacuated after the structure was deemed unstable, Wichita police said.

Two of those killed were inside the building when the plane crashed, police said. The pilot was killed. A friend of the pilot identified him as Mark Goldstein, 53, of Wichita.

"He was a gentle soul," Rod Jacobs said. "He wasn't an arrogant, a typical, arrogant pilot. He was quiet."

Jacobs said he's known Goldstein for 10 years. He was single and had no children.

"He was funny. You know those quiet, silent types -- every now and then will come up with a gem and just say, 'Oh my god, did he say that?' Jacobs said.

Of those injured, CNN reports one was in serious condition and another in fair condition. The other three, who were in good condition earlier in the day, were released on Thursday.

FAA and National Transportation Safety Board investigators responded to the scene.

"There is a small aircraft that went into the FlightSafety building" near Mid-Continent Airport, said Steve Phillips, a FlightSafety International spokesman.

The plane was a Hawker Beechcraft B200 Super King Air, Phillips said. It was en route to Mena, Arkansas.

"It doesn't happen. PT6 engine...they're the best. They don't quit," Jacobs said. "There's a reason this engine quit and that's gotta be the focus of this investigation."

The FAA said the twin-engine plane lost an engine on takeoff and crashed into a two-story building.

"He flew that airplane the best he could," Jacobs said of Goldstein. "He flew it all the way as deep into the crash as he could. It was just a tough tough situation."

The roof on the building's eastern side has collapsed.

The building is across the street from the airport and served as a training center for pilots. There were about 100 people inside the building at the time.

Video from KSNW showed thick smoke rising from the building at 10:20 a.m.

Flights were operating normally, though some roads around the airport were blocked off, the airport said in a tweet.

"The building has sustained serious damage, including the collapse of walls and ceilings," read another airport tweet.