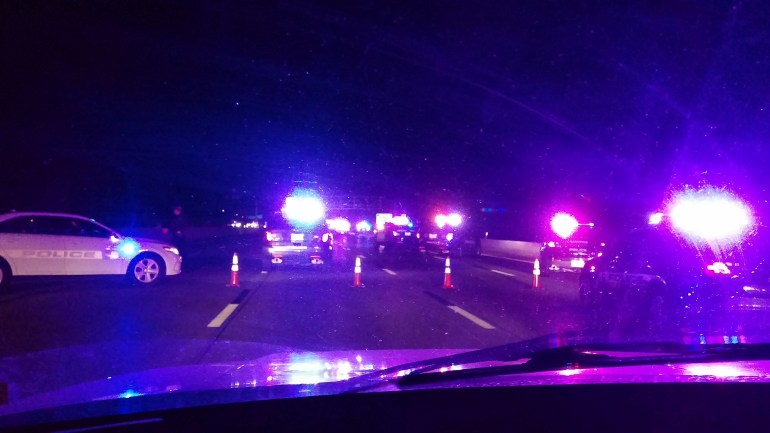 OLATHE, Kan. – Police pursued an aggravated assault suspect from Olathe to I-435 and Lee Blvd., where he refused to exit his vehicle or follow directions from officers.

Shortly after 6 p.m. Sunday police were called to a residence in Olathe in the 16000 block of W. 141st Terrace on a report of domestic violence. As officers arrived the man was leaving the scene in his vehicle. Police attempted to stop the man but he refused.

The suspect finally stopped on I-435 between Mission and Nall, but refused to get out of the truck, which shut down a part of I-435 for over 30 minutes.

Police did not believe the man was armed, but as a precaution began talking with him in an attempt to get him out of the car so they could take him into custody. The man finally gave up without incident.

The university announced Clarke’s death in a release Thursday night, but did not include any more details. Coach John Calipari said he was “absolutely gutted and sick tonight” and called the player “a beautiful kid, someone who owned the room with his personality, smile and joy.”

WICHITA, Kan. (KSNW) - A Wichita elementary school teacher is going viral on TikTok after popping a big question recently to her class.

"I asked each student by name, if they would be my junior bridesmaids and junior groomsmen," said Alexandra Stamps, a fifth-grade teacher at McClean Science-Tech Magnet Elementary.

(VENN) -Hades, the indie darling from Supergiant Games, won game of the year at the 24th annual DICE Awards, the longest running awards show in the gaming industry.

Hosted by Kahlief Adams, Greg Miller and Jessica Chobot, the live event featured roundtables for each category. The pre-recorded discussions consisted of key developers for each title nominated in a category. While the roundtables were cut down for time, the full interviews will be released over the coming month.

‘It’s a doozy’: Bridge replacement to close portion of I-435 in Missouri for the weekend