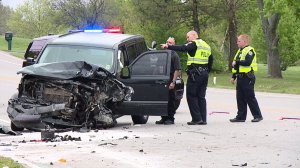 OLATHE, Kan. — Police have now identified the woman killed in a head-on crash near Lake Olathe.

According to police, witnesses said a SUV crossed the center line and hit another SUV head-on.

One driver was a 17-year-old boy. He was taken to the hospital in stable condition.

The other driver, identified as 34-year-old Ashley Veach, of Olathe, was taken to the hospital in critical condition. She later died from her injuries.

A 5-year-old passenger in Veach’s SUV was not injured.

Police said the crash is still under investigation.

Anyone with information in the case is asked to call the TIPS Hotline at 816-474-TIPS.

JACKSONVILLE, Fla. -- Despite battling homelessness, a Florida teen has become the top student in his high school graduating class.

Martin Folsom has been waiting and praying for the moment he could put on his hard-earned cap and gown as class valedictorian.