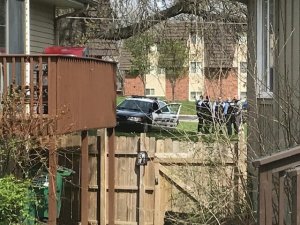 LEE’S SUMMIT, Mo. — Two suspects are in custody Thursday afternoon after a standoff with one suspect at a Lee’s Summit apartment complex.

Sgt. Chris Depue said officers attempted to stop a vehicle on a traffic violation around 1:45 p.m. Thursday nearly Interstate 70 and Woods Chapel Road. When the vehicle fled the area, a pursuit began.

Depue said another officer attempted to deploy tire deflation devices, and the suspects attempted to hit the officer as he was doing so.

The vehicle eventually drove through a grassy area near Sage Crossing Apartments on Howard Street before hitting a tree. The two suspects got out of the vehicle and ran into an apartment.

One suspect was initially taken into custody, but a standoff with the second began when the suspect refused to exit the apartment.

Several minutes later, police said the standoff ended when the second suspect surrendered and was taken into custody. No one was injured.

KANSAS CITY, Mo. -- Since 1996, Duane Harvey, a Kansas City funeral home director has spent his Election Day with a livelier crowd than he’s used to.

“It’s been very pleasing. It’s been a pretty comfortable ride, It’s not like riding in a hearse,” Harvey, founder of Duane Harvey Funeral Directors, said.

COVINGTON COUNTY, Miss. -- A sheriff's office in Mississippi said 17 inmates were baptized last week in what they hope will be a "new start."

The Covington County Sheriff's Office said the ministry provided at their department "has been a blessing in many ways," WFLA reports.