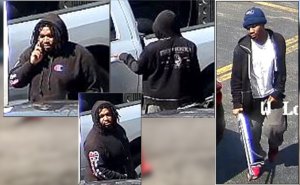 KANSAS CITY, Mo. — Kansas City, Missouri police said they are looking for for two people possibly connected to a shooting last Monday that left one man dead and a woman injured.

Police said the individuals should be considered armed and dangerous.

Bryant Robinson, 24, has been charged with second-degree murder, first-degree assault and two counts of armed criminal action in Jackson County.

On Monday, April 1, police were dispatched to a reported shooting near 63rd and Manchester where officers found the two victims inside a car suffering from gunshot wounds. Michael Garrett, 40, died from his injuries. The woman driving was taken to a nearby hospital in critical condition.

Court records say witnesses told police a silver Dodge Ram pickup was behind the victims’ car on 63rd Street when someone inside the vehicle allegedly stuck a rifle out the window and fired numerous times.

According to police reports, Robinson was the victim of a 2013 shooting that left him paralyzed from the chest down. Garrett was a suspect in that shooting, but he wasn’t pursued, according to court records, because Robinson declined to cooperate with the investigation.