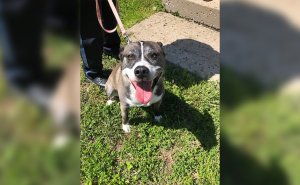 KANSAS CITY, Mo. — Kansas City police say an emotional support dog that was apparently stolen from their Northland home has been located.

Police tell FOX4 the dog has been reunited with her owner and an investigation continues into where she was and/or who had her.

Earlier on Tuesday, Abby the dog was reported to be missing after apparently being taken from the victim’s backyard near NE 53rd and Bales Ave. last Wednesday at 1 p.m. while the victim was in the shower.

The fence to the backyard was found open and it isn’t believed that Abby could have opened the gate on her own, according to police.

Abby was not located anywhere in the neighborhood. Police said Abby is very obedient and well trained and is the primary emotional support for the victim.

Officers say they have previously met Abby when her owner needed medical services and have partnered on numerous occasions to engage in services for him.

CAPE CANAVERAL, Fla. (WFLA) - NASA is moving forward with its plan to make a second attempt at a historic launch of the crewed SpaceX Demo-2 mission on Saturday afternoon, despite some iffy weather.

The first commercial crewed mission was initially scheduled to take place Wednesday but had to be scrubbed less than 20 minutes before liftoff due to unfavorable weather. Weather is once again a concern for Saturday's targeted launch of 3:22 p.m. ET.

LENEXA, Kans. – Just after 6:00 a.m. Saturday morning Lenexa police and fire crews were called to the Vintage Park Assisted Living facility for a reported burn injury.  While crews were on the way, the call was declared a building fire.

When firefighters arrived on the scene there were no signs of smoke or fire.  The crews were directed to an apartment in the building where they located a victim suffering from burns.  The victim was taken to the hospital and is being treated for burn injuries and is in critical condition.

KANSAS CITY, Mo. -- In response to scheduled protests in Kansas City today and out of an abundance of caution, the Country Club Plaza will be closing at 4 p.m. today and will remain closed on Sunday.