INDEPENDENCE, Mo. — Police in Independence are asking for the public’s help to identify two people they’d like to speak to in connection with a police shooting.

The officer-involved shooting happened at about 8:45 a.m. Sunday in an apartment complex’s parking lot on E. 37th Terrace Court South, which is just north of Centerpoint Medical Center and Independence Commons. 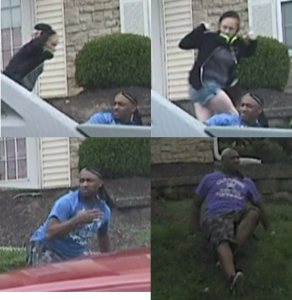 Officials say a confrontation preceded the shooting, and then the suspects’ truck crashed into police cars. One suspect who was shot drove away, while two others in that truck ran from the scene.

Officers chased the suspect who fled until the driver crashed at Lee’s Summit Road and I-70. That suspect was taken into custody and then sent to a hospital for minor injuries.

Police are still looking for the two who ran. They did not say how the two they’re trying to identify are involved in the incident.

Murkowski, who has served the state of Alaska since 2002, says her position remains the same now, in the wake of the death of Justice Ruth Bader Ginsburg, as it was in 2016, in the wake of Judge Antonin Scalia.

WASHINGTON - Due to Justice Ruth Bader Ginsburg's recent passing, Republican Senator Roy Blunt said he would find it foolish for President Donald Trump to not try to fill the Supreme Court vacancy.

OKLAHOMA CITY (AP) — Tropical Storm Beta on Sunday was making a slow crawl to the shores of Texas and Louisiana, casting worries about heavy rain, flooding and storm surge across the Gulf Coast.

Beta was one of three named storms whirling in the Atlantic basin during an exceptionally busy hurricane season. If the system makes landfall in Texas — which forecasters predict it will sometime Monday — it would be the ninth named storm to make landfall in the continental U.S. in 2020. Colorado State hurricane researcher Phil Klotzbach said that would tie a record set in 1916.