KANSAS CITY, Mo. — A Kansas City Public Schools substitute teacher who is running for a seat on the school board is now under police investigation.

The probe into Catina Taylor’s conduct comes after the substitute teacher allegedly gave her students extra credit to campaign outside the polls for her on Election Day last week.

Taylor is a write-in candidate for the KCPS school board’s 5th sub-district seat. The write-in election results will be revealed Wednesday, according to the Board of Elections.

However, the new allegations against Taylor could now put her chances of winning in jeopardy.

It all started at African-Centered College Preparatory Academy in Kansas City, where Taylor has served as a long-term substitute teacher.

It’s also where parents, who declined to go on-camera, said Taylor picked up her high school students, then shuttled them in her private car to a polling place last Tuesday.

“If those allegations are true, I think it`s truly unfortunate,” Curtis Rogers, vice-chair of the KCPS Board of Education, told FOX 4 in an exclusive interview Tuesday. “We always like to see a good and clean campaign that’s run.”

Parents also told FOX 4 Taylor created her own permission slips (which they initially thought were legitimate) and offered kids extra credit to help campaign for her as she seeks the 5th sub-district seat on the KCPS school board.

“It’s disturbing,” Rogers said. “It was very surprising to me, if these allegations are true, and I guess after the investigation, whatever the facts are, they will come out.”

Rogers is not only the vice-chair of the school board, but he currently represents the seat Taylor is seeking.

A former teacher and principal for 36 years, Rogers decided not to run for re-election, but he still has some questions about that recent “field trip.”

“Any time a student leaves school grounds, there`s a process that`s in place for that,” Rogers said.

The school’s principal, Tyrone Bates, addressed parent concerns in a note sent home to parents Monday. In it he said there was a breach in field trip protocol and he’s now launched a thorough investigation to ensure it doesn’t happen again. 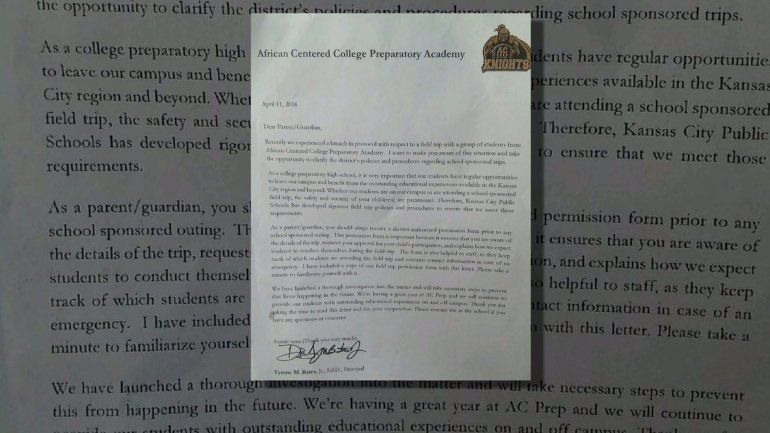 When FOX 4 contacted district officials for more information, we were told by a media representative, “We will not be making a comment because it’s a personnel matter.”

But Jackson County prosecutors confirm they’re looking into it, and released this statement to FOX 4 Tuesday:

“We have received information from Kansas City Public Schools regarding this matter and we have requested the Kansas City Police Department assist in an investigation. We cannot make further comment right now because of that investigation.”

Rogers said there are “clear guidelines” set out by the Missouri Ethics Commission to determine what’s considered ethical and legal conduct by a candidate.

When we later contacted her by phone, Taylor said she no longer works at African-Centered College Preparatory Academy. However, she claimed, no one has told her she’s being investigated for any wrongdoing.

“It is news to me,” she said. “I have not received any information. No one from the prosecutor’s office or police department has contacted me.”

“If there’s an open investigation that I’m not aware of,” she said, “then you would of course understand that I would have to seek counsel before I made any comments about that.”

Jon Hile, chair of the school board, also declined an on-camera interview Tuesday. However, he said he is aware of the situation and wants to wait until the write-in election results are revealed Wednesday and the school board meets Wednesday night before sharing his opinion on the matter.